One of the management tasks that run concurrently with your development includes test case management. Good code is derived from good tests. Moreover, as with any aspect of a software development project, careful planning will determine the effectiveness of your test approach. Truth be told, it's easy to get lost in all of Team System's testing capabilities. This section runs through a practical scenario and shows you how tests are managed end-to-end.

Test case management involves more than the organization of tests. You need to manage how to properly write test specifications, how to automate and monitor your test runs, how to write effective bug work items, and so forth. The diagram in Figure 13-31 shows one of the many ways tests cases can be managed within Team System. 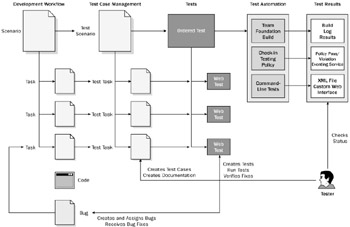 As you can see, test cases are written in parallel with the development workflow to verify the functionality of each feature (or task). Let's look at the process if you are using MSF for Agile Software Development. At the beginning of the project, the project manager receives a list of scenarios and quality of service requirements from the business analyst. At this point, the project manager must break down the scenarios into development tasks and work out tests to test each scenario with the designated tester. You may want to divide your tests in classes - build verification tests (BVTs), iteration (or milestone) tests, and daily (or nightly) tests.

Let's say we are developing a Web front-end log-in page for an ASP.NET application. Most applications go through a mock-up before development. The target application has to have the same look and feel and functionality as the graphic (shown in Figure 13-32). 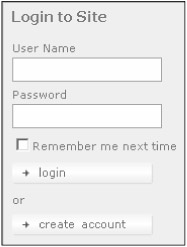 As a project manager, you are given the feature to build as a requirement (or scenario). In MSF, scenarios are written out very specifically. For example, "Harry, the manager, wants to access the administrative site. He clicks on the log-in button on the main page of the portal and is led to a page with a user name and password field. He visits the site quite often therefore he clicks on the Remember Me check box to remember his credentials. He then clicks on the log-in button to quickly enter the desired site." Some business analysts and project managers prefer to write more-functional generic specifications, such as "Build log-in screen to access administrative site." The project manager then has to decompose this scenario or requirement into a set of development tasks. Figure 13-33 shows our scenario as a summary task, and the subtasks in Microsoft Project.

As the project manager starts figuring out the development tasks, it's also a good time to work out the test process for each task (or feature). In Microsoft Excel, test scenarios and test tasks are created that correspond to our development scenarios and tasks (as shown in Figure 13-34). Note that you can create a new work item type called "test case" to manage all your tests. A question you might be asking is, why create a new work item for each scenario and task? Isn't it duplication? There are several answers to these questions: First, you are establishing workflow for your tester separate from your development workflow. (Team System does not support assigning a work item to two individuals - although you can assign a work item to an entire group in special cases.) Second, these test work items are used to fully document your test approach.

As soon as features are implemented, tests are set up side-by-side to make sure that the application is functionally correct. In our scenario, we are building a Web application; therefore, the most logical way to test it is using Team System Web tests. In Figure 13-35, we've built Web tests for two test tasks: 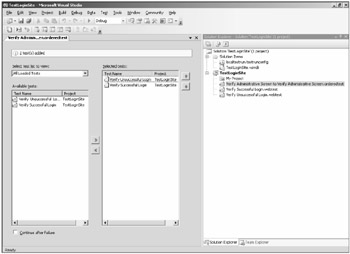 In the real world, you will likely want to set up different log-in verification Web tests according to personas, using different credentials for each persona. We can roll up all these Web tests into a single Ordered test, which represents one of our main scenarios (also shown in Figure 13-35).

Manual testing is the process of testing software by hand and writing down the steps to reproduce bugs and errors. Before you start manually testing an application, you should formulate a solid set of test cases. Automated tests are predefined in scope, and can only confirm or deny the existence of specific bugs. However, an experienced tester has the advantage of being able to explore facets of the application and find bugs in the most unlikely places. Because software isn't completely written by machines (yet), human error can creep into the design and structure of an application. It takes the eye of a good tester to find these flaws and correct them. You can create and structure manual tests in the same way as your automated tests (as shown in Figure 13-36). 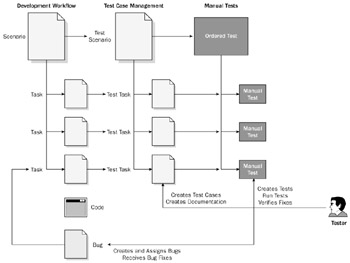 What kind of tests can be automated? Team System provides several test types that support automation. These test types include:

Now that we've identified the kinds of tests we can automate, let's look at the different ways we can trigger test automation within Team System:

Once you run the test, you'll notice that the results.xml file is quite long. If you scroll down the file a bit, you will find the result node with the results of your test. Notice that the Ordered test contains three tests, three tests were executed, and three passed:

Using the command line tools, you can copy over the XML results file in a virtual directory, read it with an ASP.NET page, and create a custom dashboard for your testers. CruiseControl.NET comes with an .xsl file called MsTestSummary.xsl. The file may save you some time in trying to format the output.

Once the tester has analyzed the results of the test, they can assign bugs, rerun tests and create tests (according to the requirements). Test Results (.trx) files can be attached or linked to a bug work item. There are many integration possibilities out there.