The Exchange 2000 architectural diagram as shown in Figure 1.2 is more complicated. Even those components that are retained from earlier versions of Exchange have been significantly changed.

IIS acts as the protocol server for Exchange 2000, managing the socket connections to the client. Internet protocols such as SMTP, IMAP, and POP are hosted within the IIS environment rather than being part of Exchange. Each service is implemented as a virtual server and each IIS instance can host multiple copies of the same protocol or multiple different protocols.

Exchange 2000 can use the IIS Front End/Back End (FE/BE) architecture to improve horizontal scalability. The Front End system serves as a protocol parser and the Back End system is the interface to the store. An IMAP or POP client connects to the FE system and specifies the users mailbox. Once the user is authenticated, the FE system consults the Windows 2000 Active Directory to determine which BE system has the users data. Roundrobin DNS can be used to make the entire group of IIS Front End systems appear to the client as a single system with a single IP address. This can be used to balance the user load across all of the FE systems. When the user load exceeds the capabilities of the FE systems, additional FE systems can be added without changing the client configuration.

Epoxy is a high-performance inter-process communication facility that uses shared memory to communicate between IIS processes and Information Store processes running on the same system.

The Exchange Installable File System (IFS) is a file system interface to the Exchange Information Store. One of its purposes is to reduce memory copies and disk I/O for inbound and outbound messages. This allows the protocol servers to retain the appearance of a one-to-one correspondence between messages and files, even though the actual contents are stored in a single NTFS file.

Exchange 2000 extends the Windows 2000 Active Directory schema to add new, Exchange- related properties to the user objects. These properties include the information store that holds the users mailbox, user-specific quotas, and delivery restrictions. Configuration data is placed in a special Exchange container. Since Exchange is no longer responsible for the directory service, it is also no longer responsible for replicating the directory information throughout the environment. Replication of all Active Directory objectsincluding the Exchange objects and propertiesis performed by Windows 2000. Tailoring the replication process is also done using Windows 2000.

The Exchange 2000 message transfer service uses the Windows 2000 SMTP Routing Engine. The old Exchange 5.5style MTA is still available in Exchange 2000. However, by default, it is not configured. It is only used if needed to handle X.400 or for transport in environments that contain both Exchange 5.5 and Exchange 2000 servers. 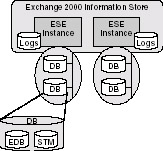 The Exchange 2000 Information Store has been significantly enhanced to improve scalability and availability. These changes will affect Exchange organizational designs and will also affect how Exchange is managed once it is deployed. The Exchange 2000 Information Store (also often referred to as the WebStore) can be partitioned into up to four Storage Groups. Each Storage Group is managed by a separate Extensible Storage Engine (ESE) instance and can contain up to five databases. All databases within a Storage Group share the same set of transaction log files. Each database actually includes two files:

The changes to the information store influence both the placement of user mailboxes and the backup/recovery strategy for Exchange 2000. An updated backup utility that understands and takes advantage of the new Information Store architecture is included with Exchange 2000.

Even much of the basic terminology has changed.

The Exchange 5.5 IMS has been replaced by the Exchange 2000 SMTP Virtual Server. All of the Internet protocols can be implemented as multiple virtual servers.

Exchange 5.5 Address Book Views have been replaced by Exchange 2000 Address Lists. The familiar Global Address List (GAL) is just one of these address lists.

Most of the changes for Exchange 2000 are designed to improve scalability, performance, or reliability. However, many of the changes either directly or indirectly influence how the Exchange environment is managed.

Do not look for the familiar Exchange 5.5 Admin program. It is gone. Exchange administration is now performed by a set of MMC snap-ins. User information is maintained using the Active Directory Users and Computers snap-in. Exchange-specific components are managed using the Exchange System Manager snap-in.