Tell me, tell me if anything got finished.

Extensible Markup Language (XML) is what makes Web services possible. Everything to do with today s Web services are based, one way or another, on XML. The link between XML and Web services is inextricable and incontrovertible. All data transfer to or from a Web service always has to be in the form of an XML document. That is a given. The input parameters to a Web service are thus structured and defined using XML, as is the output generated by a Web service. In addition, the input/output operations of a Web service, which are implemented in the form of a remote procedure call mechanism, are realized using an XML-based messaging scheme ”namely, SOAP.

The workings of a Web service are also described using XML, in this case WSDL, which is an XML derivative. The W3C s proposed definition of what a Web service is supposed to be states categorically, in the very first sentence , no less, that the public interfaces and bindings of a Web service are defined and described using XML. Many of the auxiliary standards associated with Web services (as shown in Table 1.1), such as those related to security and discovery (e.g., WS-Inspection), also happen to be XML-centric. Even the proposed GUI standard for Web services (i.e., WSRP), though not XML-specific, given that information presentation per se is not exactly XML s cup of tea, still makes sure that it includes support for presentation-oriented dialects of XML, such as VoiceXML. Table 2.1 highlights the deep-rooted relationship between XML and Web services ”Web services now assume the role of the killer application for XML. Figure 2.1 builds upon the Web services model introduced in Figures 1.2 and 1.9 to show the role of XML vis--vis the workings of a Web service. 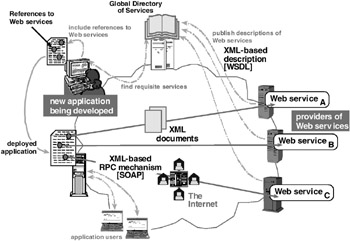 Figure 2.1: Role of XML vis--vis the workings of a Web service.

It is also the total dependence on XML that ensures that Web services are indeed platform neutral and programming language independent. Hence, it is XML that truly differentiates and distinguishes today s Web services from all previous software component methodologies. Web services, in their current form, would not be here if not for XML. This is why they are often referred to as XML Web services by technocrats in order to unequivocally convey the inescapable link between XML and Web services.

Web services have become the killer application for XML. XML was formulated in the 1996 “1997 time frame to facilitate data interchange between incompatible systems. It is a standardized, platform- and programming-language “independent mechanism for sharing data in a consistent, unambiguous, and meaningful manner. It provides a framework for describing data. XML, in effect, makes data self-describing . Figure 2.2 illustrates the overall concept of data description la XML by showing how the composition of a well-known poem could be defined using XML.

It is the any-to-any data interchange capability made possible by the self-describing data that makes XML so indispensable to Web services. Thanks to the availability of XML, which was ratified as an industry standard by the W3C in February 1998, Web services did not have to come up with their own scheme for data exchange. Instead, Web services were able to piggyback on the ground swell building up around XML. One could even say that it was the presence of XML that provided the impetus for the creation of Web services. It is also safe to say that the credibility and acceptance that Web services enjoyed, from the get-go, from within the technical community can be largely attributed to the fact that they were based squarely on the XML standard and did not try to espouse any new mechanisms for data interchange.