The concept of smart objects rests on the connection which exists between two objects thus enabling them to communicate. This connection can be associated with a real physical link between the objects or with a virtual link created during the transfer of information, and only during this exchange, of a transmitting object towards one (or from) receiving objects and reciprocally.

Concerning the connections with real link, the connection can be wired. One can have an electric connection: copper wire allows indeed the transport of information by the displacement of electric charges going from an object towards one (or from) another object; the intensity and the format of modulation then defines the order between the objects. One can also have a guided optical link. The link is made by optical fibres or more generally by optical guides, information being then transported by guided photons characterised by their energy (their wavelength), their intensity and their format of modulation.

Modern smart objects do not have to have wired links between them, the only physical link can be electromagnetic waves in open space connecting the objects. In this book, we present the technology of connection establishing communication between objects with the only reservation that it is unwired. We have not considered the transmitters and receivers which them form an integral part of the object itself.

The use of radio as a physical link and to control smart objects is most common. But this radio operator link, invisible and diffusing , can have, according to its characteristics, completely different properties with respect to its use desired mode communication: outdistance, flow rates, quality of service etc.

The frequency of the radio wave is one of the first characteristics defining it. Broadly, this frequency can range from a few hundred kilohertz up to frequencies of a hundred gigahertz. One goes from the normally used frequencies to telecommunications between mobiles (standard GSM, GPRS, UMTS) to other higher frequencies specific to smart objects (Bluetooth) or worms of higher flow rates towards 5GHz (Hiperlan, IEEE 802.11). Then, at even higher frequencies, not yet used for smart objects, applications are studied, in particular around the frequency of 60 GHz (known as millimetre-length wave for its wavelength is about the millimetre). Generally, the frequencies of communication are strongly related to the potential flow rates. The higher the frequencies, the greater the flow rates in the communications can be. Working Bluetooth with 2.4 GHz allows exchange flow rates of 700 Kbits/sec. 60 GHz allows flows of more than 100 Mbits/sec.

Another useful parameter for these radio waves is the emission power. Indeed, the greater the power of emission, the better the wave will carry far information, or also the power can be adapted to the distances desired for the communications. But the emission powers used must be reasonable if one wants to minimise other disturbing effects (electromagnetic compatibility, biochemical effects).

The transport of the information bits between the objects can also be done at frequencies of the much higher then placing us in the field of optics. Classically, one will work then with wavelengths for which the technologies of the transmitters and receivers are mature, i.e. in the optical ranges corresponding to visible and the infra red. These optical beams, non-guided, being propagated in open space, allow very high flow rates. The objects could communicate between them with flow rates of the order of Gbits/sec and even more

The optical beams are propagated in a straight line in the atmosphere and are weakened throughout their course. They do not allow propagation at very long distances. One hopes however to be able to communicate outside for several kilometres and with flows of some gigabits/sec. In a confined habitat, i.e. in a part of a few tens of m 2 , the communications between objects if they are in direct sight will allow probably connections with very high flows that are so necessary; if it is in nondirect sight, the photons are reflected on any obstacles which there will appear on its course (walls, ceilings, floors, windows and pieces of furniture) making the flows less usable lower but remaining high compared with those that one would obtain by traditional radio technologies.

But also, technologies of optical sources and transmitters enable one to foresee the possibility of beams of a few photons and in particular one photon. The singular character of the photon, which is not any more the same one if it were detected , allows prediction of communications with 1 photon of which it is absolutely impossible to copy and to know the contents. There is a technology for smart objects here absolutely singular and expensive, but can require certain quite specific situations.

Both technologies, radio and optical, each have advantages and disadvantages. Apart from the performances themselves (flow rates, distance, treatment of the signal), an aspect important to consider is the relation wave- user , or wave-man in an electromagnetic sea. Even if it is not shown scientifically that, engulfed in an atmosphere in which multiple radio waves are propagated, it is suffers physical deterioration, one can provide that an environmental requirement of the whole (or a part) of the population will be to reduce these radio waves in rooms, places of work and the atmosphere. The communication between objects by optical beams fills this requirement; moreover, associated with strong potentialities in flow rates one can predict an attractive future for this technology. The future of communication by optical beams will have to also take into account the public health aspect. It will be essential to quantify with the assistance of the ophthalmologists what are the limits (wavelength, outdistances and power) for which the optical beams do not present any danger to the eyes.

For the security of the contents of information between the smart objects,, solid state physics proposes original solutions which will make it possible to ensure communication between objects in a confined space). First attempts to bar, in optical flows, only one wavelength while leaving total transparency for the others are in hand. They could be generalised for all frequencies and wavelengths and in particular for smart objects communicating by radio waves.

Except in very particular cases, the communicating objects are not directly visible. The quality of the communications is strongly dependent on the properties of the environment of the electromagnetic wave propagation. Indeed, of pieces of furniture, people, buildings, trees or any other obstacle can attenuate, reflect, diffract or diffuse the wave being propagated in open space. Thus, the wave received by a receiving object is not only the wave emitted by the transmitting attenuated and delayed object but the sum of a multitude of counterparts of the emitted wave. These counterparts follow ways different according to topography from the places at the moment of the exchange of information, and they are characterised by a delay and an attenuation which are clean for them. This phenomenon of multitrajets can cause interference and degrade the quality of the communications. For more certain and the most faithful possible exchanges, and whatever the desired situation of the communications between objects (in a crowd , at the seaside, in a room, a workshop), many of the studies of propagation, signal processing, physics are still necessary.

Lastly, before finishing this brief presentation of radio and optical technologies for unwired smart objects, one can dream of objects which communicate at long distances by using technologies of the radio and/or optical ad hoc networks. 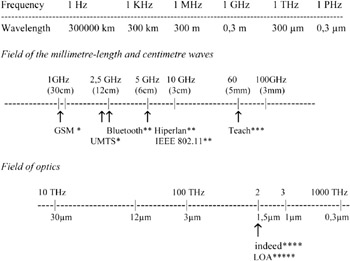 These diagrams illustrate frequencies and the corresponding wavelengths L (1 = c/ , C being the speed of the light in the air) of the electromagnetic waves usable or foreseeable uses in 2002 for the communications between objects. Some frequencies (wavelengths) are more specifically used and of the more precise details are indicated in the following chapters: