In the context of archaeological prospecting activities, our work focuses the harmonious fusion of the real world or physical environment with the digital world or data processing in mobile and collaborative situations. The objective is to understand the use of the mobile supports and the services awaited in collaborative situation for a user task in the real world, justifying the fusion of the two worlds, the physical and digital worlds .

Two properties are the bases of our study: transparency of the interaction and ubiquity.

These two properties fall under the current approach of the human computer interaction (HCI) which preaches the universality of the interfaces. The data-processing tool is integrated into the physical environment, accessible from everywhere and by all. To satisfy these two properties, we adopted a design approach based on scenarios [Carroll 00] presented in Figure 19.1. In addition to the recognised interests of a scenario based design approach [Jacobson 95], the fact that the scenarios are centred at the same time on the users and the various tasks makes it possible for us to determine their needs and their relationships to the physical environment. 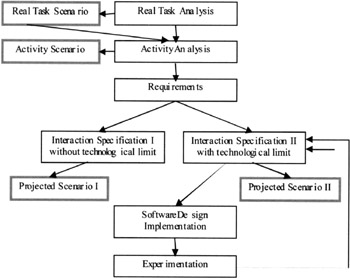 In [Nigay 2002], we fully describe the design steps and illustrate them. In particular examples of real task and projected scenarios are provided. Having presented the design steps, we now present the outcomes , the designed and developed MAGIC platform.