Launch XMLSPY 5 from the Windows taskbar by choosing Start ? Program Files ? XMLSPY 5 Enterprise Edition ? XMLSPY 5. Upon installation, XMLSPY 5 optionally becomes the default resource associated for various XML-related file types (.xml, .xsl, .xsd, .xhtml, .wsdl, .fo, and so on). Simply double-clicking any of these associated file types from the Microsoft Windows Explorer automatically launches XMLSPY 5. After you have launched XMLSPY 5, you see the screen shown in Figure 2-1. 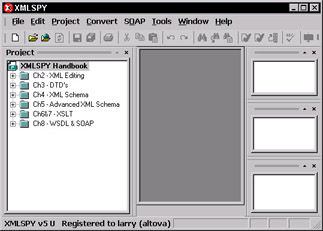 On the CD By default, the special XMLSPY 5 version included on the CD-ROM that accompanies this book opens a project folder with example files corresponding to the chapters of this book. The Project window has several folders: Ch2, Ch3, Ch4, and so on. You can find these example files in C:\Program Files\Altova\XMLSPY\Examples\xmlspyhandbook. If the version of XMLSPY that you are using is not the same as the one included on the CD (for example, if you downloaded it from the Web), you can still follow along by copying the XMLSPY Handbook.spp file and all subdirectories (such as Ch2, Ch3, and so on) from the CD to your local file system. Then choose Project ? Open Project and select the XMLSPY Handbook.spp file. XMLSPY’s project management features are covered toward the end of this chapter.

To create a new XML file, choose File ? New, and the Create New Document dialog box appears as shown in Figure 2-2. Choose XML Document from the list and click OK. 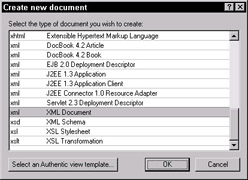 When you click the OK button in the Create New Document dialog box, another New File dialog box (see Figure 2-3) appears, asking whether the new XML document is intended to be validated based on a Document Type Definition (DTD) or an XML Schema. The XML documents are generally used in conjunction with a content model, which is defined in either a DTD or an XML Schema. I discuss XML Schemas and DTDs in Chapter 3, so for now simply click Cancel.

Figure 2-3: XMLSPY can assign a DTD or an XML Schema to an XML document.

By default, the newly created XML file is displayed in Enhanced Grid view as shown in Figure 2-4. For more details, see the section “Enhanced Grid View” later in this chapter.

The principal benefit of using XMLSPY over a regular text editor is that it offers multiple views for editing XML documents. I’ll start with Text view, which is the most basic of all available XML editing views. To view an XML document in Text view, you need to switch views either by choosing View ? Text view (refer to Figure 2-4) or by clicking the Text View icon on the main toolbar (see Figure 2-5). 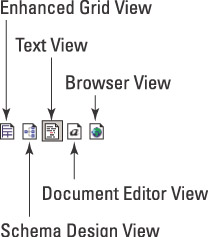 After switching to Text view, you should see the newly created XML document as shown in Figure 2-6. In the next few sections, you learn the basic XML constructs using Text view.

XML uses basic constructs: elements, attributes, and their associated values to form an XML document. An XML element (or just element) is the most basic building block of an XML document. An element’s body can contain either one or more nested elements or text-based content. Element occurrences are specified by opening and closing tags—also referred to as start tags and end tags, respectively. Opening tags begin with the less-than sign (<), followed by the element name, and terminate with a greater-than sign (>). Closing tags look very similar to opening tags, except that a closing tag has a forward slash (/) immediately after the (<) of the closing tag. This is illustrated in Figure 2-7. An element name can be just about anything (although clear, descriptive names make the most sense), provided that the following naming guidelines are met:

In Chapter 1, I defined XML as a standardized language for describing structured information. The standardized syntax guidelines of an XML documents allow it to be easily processed and understood by computer applications. The minimum requirement for an XML document to be used in an XML-processing environment is that the XML document must be well-formed, which means it must adhere to the constraints described in the following sections.

Every XML Document Must Have a Root Element

All XML documents must contain exactly one element, called the root element, which contains all other elements within the XML document (it is the parent of all child elements). This concept is illustrated in Figure 2-9.

Figure 2-9: The root element (<book>) contains all the child elements.

The only things in an XML document that may appear outside the root element are comments and processing instructions, both of which will be discussed shortly.

Every Element Must have a Closing Tag

Every element must have a corresponding closing tag; in the case of empty elements (that is, an element containing no element content and zero-to-any number of attributes), you can optionally use a shorthand, equivalent notation of the closing tag as shown in Figure 2-10.

Elements Must be properly nested

Attributes must be enclosed within Quotation Marks

As I previously mentioned, XMLSPY automatically inserts the XML declaration, which states the XML version number and character encoding information for the current document, as in the following:

XML processors, as well as applications that use XML documents, ignore whitespace (extra spaces, line breaks, and tabs)—just as Internet Explorer or Netscape browsers both ignore any whitespace in HTML code. You can have XMLSPY pretty-print your XML document by automatically eliminating any extra whitespace and nicely formatting it if you choose Edit ? Pretty Print-XML Text. This feature works only for well-formed documents.

Although you may think that your XML document is easy to understand, it is always helpful to annotate XML documents by using XML comments to improve the readability of your work. An XML comment works the same as an HTML comment: you type <!-- to begin your comment and --> to end the comment. Whatever you type inside the body of a comment is completely ignored by an XML parser. Although a double dash (--) is used to delimit the start and end of comment tags, a double dash is forbidden within the comment itself. The XML processor would read the second set of dashes as the beginning of the end-of-comment delimiter.

XMLSPY automatically changes the appearance of XML comments to a light shade of gray to prevent the reader from mistaking it for an XML element. You can easily customize the look of comments by choosing Tools ? Options ? Text Fonts.

By default, XML includes five entities, which are substitute notations for the special characters shown in Figure 2-13. 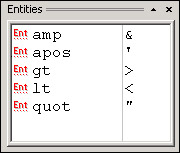 Here are some reasons why you may need to use an entity:

To use an entity, simply type the ampersand character &. XMLSPY provides a drop-down box displaying the list of defined entities. Select the desired entity using the up and down arrow keys and press the Enter key. Remember to terminate the entity with a semicolon (;). As an example, the entity for an ampersand character, when expressed using an identity, should look like &amp;. Entities are also often used as a macro or a substitute for text that frequently occurs throughout an XML document.

Cross-Reference In Chapter 3, you learn how to define custom entities.

Sometimes, you may need to write out sections of an XML document as plain text. In this case, you don’t want the XML parser to process the section as it regularly would. Suppose that you are writing a book on XML and saving the chapters as an XML document. You may want to treat the sample XML files in the book as plain text, despite the fact that the sample files contain XML markup. You can do this easily by enclosing that portion of the XML document within a Character Data (CDATA) section, which instructs the XML parser to simply treat the section as meaningless raw character data regardless of any markup inside. To start a CDATA section, simply type

and terminate the section by typing

Within a CDATA section you can type just about anything as long as you don’t break these rules: