Object-oriented programming is as easy a playing a game of Password. Fans of the Game Show Network remember the popular game where a player identifies something to another player by describing it. Try playing Password the next time your party hits a lull and you ll see how easy it is ”or isn t ”to describe something. What does the game Password have to do with object-oriented programming? Both require you to identify an object by describing it. A Password player describes an object to a fellow player, whereas a programmer describes an object to a program in the form of a class definition. Describing an object is a deceivingly simply concept to understand, but one that is difficult to do. We ll show you how the pros do it in this chapter.

The world would be a difficult place in which to live if we only described things based on their attributes and behaviors like we do when playing the game Password. Think for a moment. How would you describe yourself as a student without using the word student ? It wouldn t be easy because we don t look at the world as descriptions of things. Instead, everything in our world is viewed as an object.

If someone asks, What do you do? You probably reply by saying you are a student. No further explanation is needed because everyone knows the characteristics of a student. They know you are low on funds, pay tuition, attend classes, do homework, and go to all-night parties to break the tension.

If someone asks, How do you go to school? You probably say that you drive a car. Again, no further explanation is required. Everyone knows what a car is. You don t need to go into a lengthy descriptions of the car you drive.

As you learned at the beginning of this book, object-oriented programming is centered on identifying and describing real-world objects so they can be used by a program the same way that we use objects in real life. Throughout this book you learned how to create objects in C++ and Java programs by defining classes and then declaring instances of those classes in your programs.

Let s begin our exploration with the definition of an object. An object is a person, place, or thing ”such as a student, a campus, or a book ”that is defined by an object name , attributes, and behaviors.

An object name is the name of an object, such as student, campus, or book. An attribute is information about the object, such as a student name (Bob Smith), the name of a campus (Morningside Heights campus), or the title of a book (Object-Oriented Programming Demystified). A behavior is an activity that is associated with an object. For example, a student registers for class. The campus is open or closed. And the book can be opened or closed.

Some attributes are easy to identify because we use them to describe an object. For example, attributes of a student object are the student s name, home address, home telephone number, and personal e-mail address. You probably can think of other attributes that describe a student.

Object-oriented programmers determine the number and type of attributes that they need to identify based on the goals of the system they are developing. For example, a college admission system contains a student object. This system needs a set of attributes that identifies a student, provides student contact information, the student s academic record, and recommendations. The system doesn t need the student s complete medical history, psychological profile, or genealogical background.

For example, several standards are used to precisely define a color as a unique number. You would use the standard that is appropriate for your system to describe the color attribute of an object.

Some programmers who are not familiar with object-oriented programming confuse attributes of an object with data associated with an object. Previously you learned that an attribute is information that describes an object. Data is the smallest amount of meaningful information.

Object-oriented programmers decompose each attribute into data and then use data in the corresponding class definition to describe the object. Decomposition is the technique that reduces an attribute into its data components .

The best way to decompose attributes is to make a two-column list, as show in Table 7-1. List the attribute in the first column and then ask yourself whether the attribute is the smallest amount of meaningful information that describes the object.

If so, then use the attribute as data. For example, the attribute Graduated, shown at the bottom of Table 7-1, is the smallest amount of meaningful information. It cannot be decomposed. Therefore, the attribute is data and is listed in the data column.

If the attribute is not the smallest amount of meaningful information, then decompose (break down) the attribute into its data components. Table 7-1 illustrates the decomposition of the Student Name and Student Address attributes.

You can imagine that an object performs hundreds of behaviors. However, you don t need to identify all of them. Instead, you need to identify behaviors that are relative to the goal of your system. Let s say you are writing a Computer Aided Design application that is used to design a house. One of the objects you ll need is a window. The application shows how the window looks when installed in the house. Therefore, you only need to include two behaviors: open the window and close the window. You don t need to include how the window behaves in a hurricane because the application doesn t simulate the structural behavior of a window.

Object-oriented programmers identify behaviors of an object by brainstorming. They begin by creating a two-column table, as shown in Table 7-2, and enter the name of each object in the first column. Next, they asked themselves , What does the object do in relation to the nature of the system that is being developed? Answers are behaviors and are listed in the second column.

Table 7-2 contains just a few behaviors that are associated with a student. You can easily expand upon this list.

Once you identify all the behaviors of an object that are needed by your application, you must describe each behavior in detail. The description of a behavior consists of data needed to perform the behavior, the steps to perform, and the data that is a result of performing the behavior, if there is any.

When a function is defined, the programmer uses C++, Java, or another programming language to define the details of how the function is to perform.

A processing model is shown in a diagram that describes how a behavior is performed. The diagram is built using symbols to represent aspects of the process. Figure 7-1 contains commonly used symbols that object-oriented programmers use to describe a processing model. You probably recognize these as flow chart symbols. 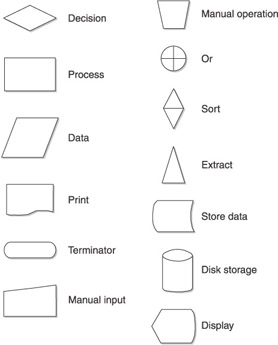 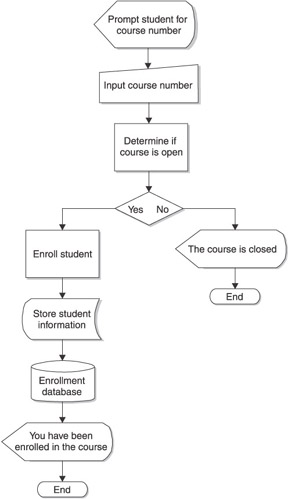 Figure 7-2: A processing model that illustrates how a student registers for a course

Within each symbol is text that provides information specific to each step. For example, the first step has the text Prompt student for course number. This tells the reader of the processing model diagram the nature of text that is displayed on the screen during that step. You don t need to enter the complete text in the symbol, but just enough information to give the reader an idea what is being displayed at that moment in the process.

Figure 7-2 is just one of many processing model diagrams used to describe the details of an application. There could be hundreds of such diagrams that are connected together to describe the entire application. For example, the process shown in Figure 7-2 links to two other processes ”a process to determine whether the course is open and another process that enrolls the student in the course. Each of these processes is represented in a rectangle in the diagram. The programmer must review the corresponding processing model diagram for each of these processes to determine the details on how they work.

Some programmers begin coding an application by using information contained in the processing model diagram. Other programmers translate the processing model diagram into pseudo code. Previously in this chapter you learned that pseudo code is a combination of English words and programming language syntax that describe in words how a process works.

The following example is the pseudo code translation of the processing model diagram shown in Figure 7-2:

Pseudo code does more than describe a process. It also organizes steps into the logical sequence that the program must follow. This enables a programmer to focus on translating pseudo code into programming syntax, sometimes by simply replacing each step in pseudo code with the corresponding statement(s) of a programming language that is needed to perform the step.