Although you can create an array with any size multidimension, many programmers limit an array to two dimensions. Any size greater than two dimensions becomes unwieldy to manage.

Why Use a Multidimensional Array?

A multidimensional array can be useful to organize subgroups of data within an array. Let s say that a student has three grades, a mid- term grade, a final exam grade, and a final grade. You can store all three grades for an endless number of students in a two-dimensional array, as shown in Figure 3-3. 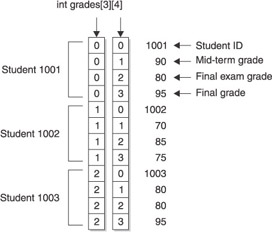 Figure 3-3: All three grades can be stored in a multidimensional array.

Figure 3-4: Elements of a multidimensional array are stored sequentially in memory.

The first bracket ([3]) tells the compiler that you re declaring 3 pointers, each pointing to an array. This concept might be confusing because the term pointer may make some programmers think of pointer variable or pointer array, which you ll learn about later in this chapter. However, we are not talking about a pointer variable or pointer array. Instead, we are saying that each element of the first dimension of a multidimensional array reference a corresponding second dimension, which is an array.

In this example, all the arrays pointed to by the first index are of the same size. The second index can be of variable size. For example, the previous statement declares a two-dimensional array where there are 3 elements in the first dimension and 4 elements in the second dimension.

The data type tells the computer that each element of the array will contain an integer data type. The data type is followed by the array name and two values that indicate the size of each dimension used for the array. In this case, there are three sets of four array elements.

Figure 3-5: Braces define sets of values to be assigned to array elements (the top example is C and C++ and the bottom example is Java).

Assigning Values to a Multidimensional Array

You must specify the index for both dimensions. In this example, the integer 1001 , which is a student ID, is assigned to the first element of the first set of elements in the grades array.

Referencing the Contents of a  Multidimensional  Array

The contents of elements of a multidimensional array can be used in a program by referencing the index of both dimensions of the array element. Figure 3-6 shows you how to display the final exam grade for the second student.