In previous chapters we illustrated that large problems are best approached by a divide-and-conquer strategy, and logical internetwork design is just another large problem. You will not be surprised to learn, therefore, that in general, most modern internetwork protocols support hierarchical models for partitioning networks into increasingly smaller, manageable, units. Figure 3.1 illustrates the key aspects of the generic internetwork architecture, and we will use this as the point of reference in subsequent discussions. Even though we are primarily focusing on IP, many of these concepts apply to other routing architectures, such as OSI, DECnet, and Novell's routing architecture. Figure 3.1 attempts to integrate some of the current thoughts on network hierarchy adopted by OSI and IETF standards. Currently, the highest level of administrative control is the Autonomous System (AS). At the AS level there are often business or political reasons for the differentiation (typically an AS is a large organization, multinational company, or a government body). Below the AS level there are further refinements of the infrastructure, and this partitioning is essentially driven by the need to provide scalability by traffic or routing management and control. In the OSI world ASs can be subdivided into one or more domains, which comprise one or more areas. Areas comprise one or more subnetworks. In the IETF world there is currently no support for domains, just areas. Intermediate Systems (IS) are used to interconnect all of these partitions, including Autonomous System Border Routers (ASBR), Area Border Routers (ABR), IntraDomain Routers (iDR), and InterDomain Routers (IDR). 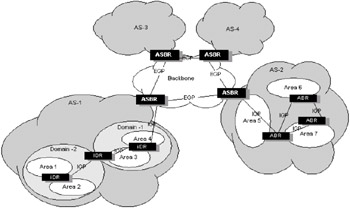 The network is divided into several hierarchical traffic and administrative boundaries. At the highest level we have the concept of AS, communicating over a backbone. Autonomous systems are generally used for very large organizations and typically contain a group of networks and routers administered by a single authority, running one or more Interior Gateway Protocols (IGPs). It may be useful to reflect on the definitions of autonomous systems used in the standards. RFC 1267 [2] states: "The use of the term autonomous system here stresses the fact that, even when multiple IGPs and metrics are used, the administration of an AS appears to other ASs to have a single coherent interior routing plan and presents a consistent picture of what destinations are reachable through it. From the standpoint of exterior routing, an AS can be viewed as monolithic: reachability to destinations directly connected to the AS must be equivalent from all border gateways of the AS."

Each AS will require a registered AS Number (ASN) if connected into the Internet. Routing information is exchanged between ASs via an Exterior Gateway Protocol (EGP) such as the Border Gateway Protocol (BGP). There are basically two classes of AS, as follows:

Next, we have the concept of routing domains. Again, it may be useful to reflect on the definition of a domain used in the IETF standards: A routing domain is a collection of routers that coordinate their routing knowledge using a single [instance of a] routing protocol.

A routing domain can itself comprise one or more areas. Areas are logical collections of contiguous networks and nodes. As illustrated in Figure 3.1, OSI routing (i.e., IS-IS) standards use the term domain as a collection of areas, whereas in IETF parlance, OSPF supports only areas and has no concept of a domain. In much of the literature the term domain is used as a generic term. Each area runs a separate instance of a dynamic routing algorithm; therefore, each area has its own topological database. Within an area there may be several networks, divided into subnetworks. All of these entities are connected together via Intermediate Systems (IS), which are Layer 3 switches more commonly referred to as routers. Devices that do not forward packets but are attached to the network are called End Systems (ES). For example, servers and workstations with Network Interface Cards (NICs), or a network-attached storage device, can all be classified under as end systems.

The ability to design a hierarchical internetwork presupposes that the routing protocols and addressing models used are capable of enforcing hierarchy on the logical topology. In order to satisfy the architecture presented in section 3.1.1, it is possible to define four levels of routing, as follows:

In order to meet the requirements of the different levels of routing functionality, there are three generic classes of routing protocols, as follows:

Sophisticated unicast dynamic routing protocols (such as OSPF and ISIS) require the creation of an explicit hierarchical topology through the establishment of a backbone and logical areas (or domains). The topology produced takes precedence over the topology created using the addressing model. When hierarchical routing is used, the network addressing scheme should comply with the logical hierarchy that is created (i.e., addressing should be consistent with the backbone and area boundaries). The topological information about a network depends on a router's role, as follows.

There are two recommended ways to assign addresses in a hierarchical network. The simplest way to achieve this is to give each area (including the backbone) a unique network address. An alternative is to assign address ranges to each area. Some older routing protocols (such as RIP) have no concept of a logical hierarchy and are, therefore, referred to as flat or nonhierarchical routing protocols. Typically there are no facilities within this class of protocol to create logical topologies, and the designer must rely upon the network addressing model alone to establish a logical routing topology.

3.1.4 Benefits of a hierarchical model

The combination of routing hierarchy and techniques such as route summarization offer several major design benefits, including the following:

All of these factors contribute to improving overall scalability and management. One downside of hierarchical networks is that route selection can be suboptimal for certain paths (since traffic between areas or domains is always forwarded through border routers, the paths chosen may not always be as short as those that would be selected if all routers had complete topological knowledge). Given the significant benefits achieved with hierarchical routing, this inefficiency is normally acceptable.