One of the most important aspects of Web content is how it is organized. The schemes used to categorize and classify products, services, and information on a website can make or break the site, because they affect how difficult it is for site visitors to find what they are looking for. Thus content organization strongly affects navigation.

The novelist and essayist Jorge Luis Borges wrote of an ancient Chinese encyclopedia containing a system for classifying animals (Borges 1966). The encyclopedia, probably fictional, was supposedly entitled Celestial Emporium of Benevolent Knowledge. According to Borges, it divided all animals into the following categories:

It is not a classification scheme that today would be considered very logical. The categories are arbitrary, overlapping, nonexhaustive, and subjective ”skewed by the perceptions of the scheme's supposed author. It is these characteristics that make the scheme seem humorous to us.

Many Web designers seem to be trying to amuse us by mimicking , in their own way, Borges' "ancient Chinese" classification scheme. The problem is, Web users aren't laughing. Well, maybe you will laugh when you see some of the examples I've found of weird categorization schemes from websites , but Web users who are trying to find something aren't laughing. They're wasting time. They're getting frustrated. They're cursing at their computers. And they're hitting the Back button.

For example, check out the categories on the Binoculars page of ZBuyer.com , an e-commerce site (Figure 1.7[A]). The categories include Camera and Photo, Products, See more Education & How-To software, Really Cool Stuff, and Michael Lewis, among others. I'll discuss the inconsistent wording and capitalization later (see Chapter 6, Blooper 46: Inconsistent Style). For now, I am concerned about a deeper, more important problem: The arbitrariness and subjectiveness of the categories. It is almost as if zBuyer's Web designers had Borges' "ancient Chinese" classification scheme in mind. 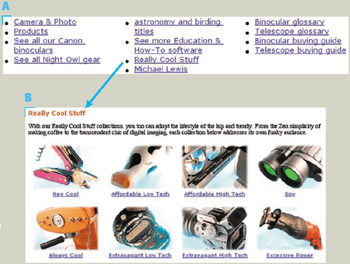 What's in Really Cool Stuff? Products to help you lead a lifestyle somewhere between Zen and extravagant (Figure 1.7[B]). That's a pretty broad category: almost anything could be in it. The subcategories of Really Cool Stuff are almost as arbitrary. The category Michael Lewis isn't a product category at all; it's about the people ”two people, not just Michael Lewis ”who edit this section of the site. People who really want to use this site have to browse through a lot of categories to find where things are.

The U.S. Postal Service's website employs a category scheme that is only a little more sensible than that of ZBuyer.com . The categories overlap considerably and it seems, at least to a postal service outsider, that what is in them is arbitrary (Figure 1.8). Here is a brief analysis of the major categories listed on the left side of the page:

Because computer-based systems make it easy and fairly natural for items to be in several categories simultaneously , it is common for categories in computer information systems ”including websites ”to overlap. Unfortunately, this gives site designers an excuse for haphazard design. Ideally, Web designers should carefully analyze, design, test, and revise a category scheme until it makes sense to prospective users. In practice, many Web designers concoct their site's categories quickly, then try to cover inadequacies by putting items in all the categories where they think people might look for them. Taken to an extreme, this approach leads to "categories" that each contain everything, which is not very useful. This is the primary problem with the postal service's categories.

A secondary problem is that the content of each category seems to depend on the page-designer's subjective whim.

Why Is This Here?

At some websites, the categories initially seem reasonable, until you look at what is in them. At Northwest Airlines' website, NWA.com, a More Specials category supposedly offers special airfares (Figure 1.9). However, someone at NWA.com thought More Specials would be a convenient place to put two announcements about new airplanes the airline is using. Hey, it had to go somewhere!

Figure 1.9: www.NWA.com (Feb. 2002)-Two items on this list are not travel specials; they are announcements about new planes. 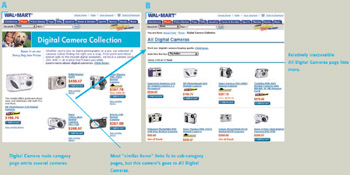 The eighteenth century Swedish botanist Karl von Linne ”better known by his Latin name Carolus Linnaeus ”devised a logical and objective biological taxonomic system. The categories in it are organized hierarchically and are independent, mutually exclusive, and exhaustive. Most competing biological classification systems of that day were almost as subjective and arbitrary as Borges' "ancient Chinese" animal taxonomy and thus had little scientific utility. The linnaean system ”as it came to be called ”soon replaced all the others and today remains the basis for all biological classification (anthro.palomar.edu/animal/animal_1.htm).

Wouldn't it be wonderful if we had a linnaean system for classifying goods and services? Assuming it became widely accepted and used in e-commerce websites, imagine how much it would improve Web surfers' ability to find what they are looking for.

Until then, Web designers need to design their site's categories carefully. In so doing, they should try to avoid the arbitrariness and subjectivity that make Borges' "ancient Chinese" animal categories humorous and useless. Detailed guidelines and best practices for information architecture are beyond the scope of this book, but entire books have been devoted to the subject (Rosenfeld and Morville 2002). I'll simply suggest a few methods that can help designers organize a site's content usefully for its users:

Though innovative, unique categorization schemes may pay off for particular websites, experience shows that it is hard to go wrong if your content categories are

An example of a website with an excellent set of categories is Yale.edu, the site of Yale University. The top-level categories and the subcategories under them are clear, nonarbitrary, exhaustive, and sensible (Figure 1.11). This is not surprising, for two reasons. First, Yale is not an Internet startup. It had no need to rush its site to market on "Internet time." Its designers could carefully design the site. And so they did. Second, Yale's Web designers have demonstrated their commitment to good Web design by writing the authoritative and widely-used Yale style guide (Lynch and Horton 2002), and then actually following their own guidelines. 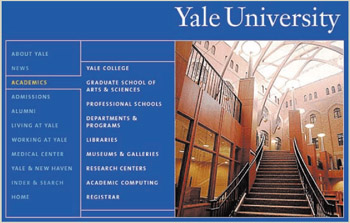 Maybe more Internet startups should follow Yale's example. By rushing to put sites on the Web, often with little or no usability testing before release, perhaps they are inadvertently dooming themselves to arbitrary, subjective, "ancient Chinese" schemes for categorizing whatever it is they offer.

[1] This item is missing a brand name; to see what the company makes, the Digital Elph, customers have to click on the link.