To recap, there are key startup configuration files for hardware, for the bootloader, and for runlevels. The hardware configuration files help you determine what was detected . The bootloader enables you to trace the location of the kernel, the Initial RAM disk, and any other operating systems on your computer. The directories for each runlevel help you customize the processes that start and stop on your Linux computer.

Once GRUB or LILO finds your boot files, the next step is to make a connection between the Linux kernel and your computer s hardware. The Linux hardware detection process consists of several parts . First, Linux takes data related to basic hardware from your BIOS. Next, it uses the kudzu utility to look for new hardware on your system. Assuming you have a default modular kernel, it then inserts any modules related to specialized hardware from the /etc/modules.conf file. You can inspect the messages related to this process with the dmesg command.

The dmesg command should show you how your kernel interacts with your hardware as Linux starts on your computer. It starts with your BIOS; uses related information to find your CPU, hard drives , PCI (Peripheral Component Interconnect) devices, and communications ports; starts the appropriate filesystems on the right partitions; and finally configures other basic devices related to keyboards and mice. Figure 11.1 shows an excerpt from my dmesg output. 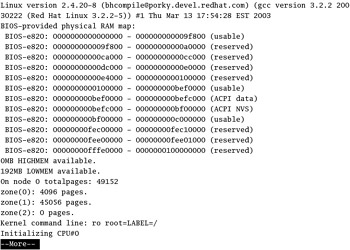 From the sample output, you can identify one CPU and 128MB of memory. If you actually have more than one CPU and additional RAM installed, this output tells you that Linux did not detect this additional hardware.

Kudzu works by looking at the various ports on your computer. If it detects and recognizes new hardware, it adds the relevant information, such as device and driver names , to /etc/sysconfig/hwconf .

If special hardware drivers are required, specifications are added to /etc/modules.conf . Linux reads this file during the boot process to load the required drivers the next time you start your computer.

If you ve just added new hardware and want to make sure Red Hat Linux detects it properly, just run the kudzu command. If additional configuration is required, you could be taken to a text version of redhat-config-mouse (See Chapter 19 ); the steps look similar to the deprecated mouseconfig utility. In rare cases, you may be prompted to add information such as IRQ ports, I/O addresses, or DMA channels.

Linux makes it easy to see how the Linux kernel views your hardware. Just look in the /proc directory. As shown in Table 11.1, various files in /proc can give you additional information on the hardware that is connected to Red Hat Linux.

The information is quite detailed. For example, take a look at the /proc/cpuinfo file in Figure 11.2. Not only does it show the rated and the effective speed of the CPU, but it also shows the cpu family , which helps you find the optimized Linux kernel to use for your system. In this case, I d use the kernel- versionnumber .i686.rpm package. You ll see how this helps in the next chapter . 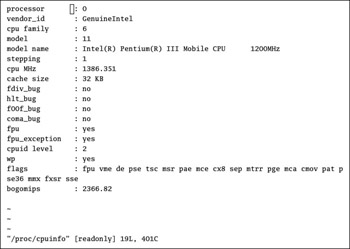 Figure 11.2: Kernel information on the CPU

Sometimes Red Hat Linux needs a little help with kernel configuration settings. There are cases where default plug-and-play settings for different components might interfere with each other. That s where the /etc/modules.conf configuration file steps in. It s where Linux stores driver, device, and address settings for various hardware components. Take the following excerpt from my /etc/modules.conf file:

Note how this defines drivers for the first Ethernet card, the USB controller, and a SoundBlaster ( sb ) card. As Linux detects more and more hardware, the importance of this file will decline over time.

When you change the /etc/modules.conf file, you can test the results immediately. For example, if you re trying to find the right settings for the SoundBlaster card, you could use the following command:

You can verify whether Red Hat was able to detect your hardware. Besides reviewing the earlier discussion on the /proc directory, you can review installed modules with the lsmod command. For example, this command on my computer lists a series of modules in Figure 11.3. 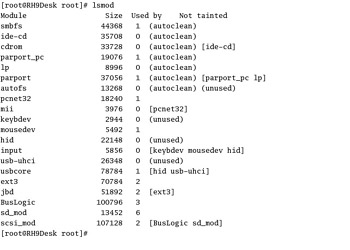 As you can see, each module has a file size in bytes. Some modules depend on others; for example, note how the mii module is required for the pcnet32 network driver module. In other words, if you tried to remove the mii module with the following command, you d get an error message:

If you remove the pcnet32 network card from your computer, Linux won t install either module the next time you start your computer. Alternatively, you could shut down networking and then remove the modules in order:

You could install modules just as easily; for example, if you need to install a new 3Com EtherLink network card and Linux isn t detecting it, you might try installing the associated module with the following command:

If successful, you won t see any error messages; check the result with the lsmod command. You should see the network card module in the output.

As we mentioned earlier, the default Red Hat Linux bootloader is known as GRUB. It is a significant improvement over LILO in a number of ways, including:

LILO is now deprecated; Red Hat plans to remove LILO from Red Hat Linux, probably in the near future. Therefore, this older bootloader is not covered in this book.

Take a look at a typical GRUB configuration file in Figure 11.4, from /boot/grub/grub.conf . 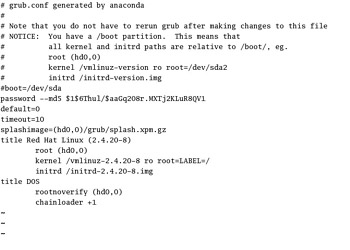 If you re having trouble with hardware, use the hardware modules described earlier as much as possible. However, you may need to give Linux some help finding hardware critical to the boot process, such as a hard drive or a SCSI controller for a hard drive. In that case, you should specify a module in the kernel line. For example, if you want to specify an IRQ of 9, an IO address of 0x330, and a SCSI ID of 7 for an older Adaptec controller, add the following command to the kernel line in your grub.conf configuration file:

If you forgot to add a GRUB password during Red Hat Linux installation, it s easy to add a secure MD5 password to GRUB. Just use the grub-md5-crypt command. When prompted, enter the password of your choice. You ll get a strange -looking series of characters that you can copy to the GRUB configuration file, in the format shown in Figure 11.2.

It s easy to copy this password from the command line. Just use your mouse to highlight the password. Open /etc/grub.conf in a text editor. Right-click your mouse in the desired location, and then Linux automatically inserts the highlighted MD5 password. Alternatively, if you re in the GNOME terminal, a right-click opens a pop-up menu that allows you to copy and paste the highlighted text.

Linux now initializes the key files, processes, and applications on your system. The governing configuration file is /etc/inittab . Open it in your favorite text editor. The key variable in this file is initdefault; the other variables just set up important parts of the Linux environment. My /etc/inittab file is shown in Figure 11.5. 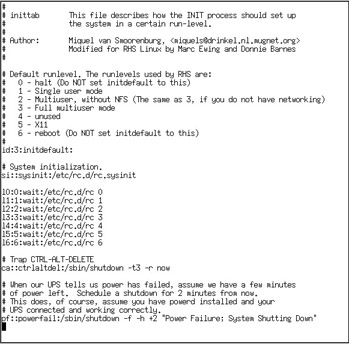 The initdefault variable sets the default runlevel, which starts when you boot Linux. For example, the following line configures your computer to start in runlevel 3.

There are six standard Red Hat Linux runlevels, as shown in Table 11.3 (runlevel 4 is not used by Red Hat). In the next section, we ll explore what happens when Linux boots in runlevel 3.

This command configures the first virtual console ( tty1 ) whenever Linux starts runlevels 2, 3, 4, or 5.

Now we ll look at how Red Hat Linux starts a runlevel with the initdefault variable. As we described earlier, it s common for Red Hat Linux to start in runlevel 3, full multiuser mode. When Linux reads the desired runlevel, it starts the associated script. In this case, the following command starts all of the scripts associated with runlevel 3:

This command points to a set of scripts at the associated runlevel, and then executes kill and start scripts, in that order. It s easy to compare two different runlevels. Just examine the list of scripts in the appropriate directories. Figure 11.6 compares the scripts from runlevel 3 with runlevel 1. 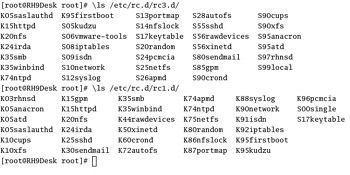 The directories are fairly straightforward; kill scripts start with a K, while start scripts begin with an S. These scripts are executed in the order shown. But there are differences. Runlevel 3 starts over 25 services, many related to networking. Runlevel 1 kills just about every available service, except those needed for single-user mode. No networking or multiuser configurations are required in single-user mode.