Linux includes a number of commands to help you read files in different ways. You can verify different types of files, and you can read files from the top or from the bottom. This read can be limited to a few lines, or it can set you up to page through the entire file. You can also count the lines, words, and alphanumeric characters within a file. In addition, Linux lets you search through a file using the search term of your choice.

Because it is difficult to define words or lines in binary files, most of these commands work best with text files.

Although some distributions differentiate between file types by color , there are no standard extensions in Linux. Executable files don t end in .exe , and document files may not end in .doc . The file command allows you to view the type of each file. You can see how this works in Figure 6.2. 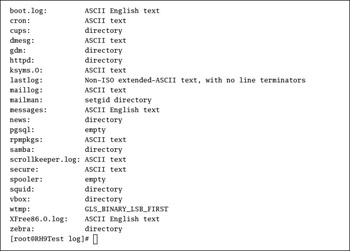 As you can see in Figure 6.2, you are not able to see the file type if you don t have the proper permissions.

This command is flexible; you can even use it to read multiple files, in sequence, with the cat file1 file2 command.

If you substitute tail for head , you see the last 15 lines of this file. Table 6.7 lists more switches you can use with these commands.

The more and the less commands aren t opposites, like head and tail . They both start at the beginning of a text file. When you run these commands on a text file, you review the contents of the file one page at a time. The less command is more versatile; unlike more , it allows you to scroll up and down any large text file by using the Page Up and Page Down keys on your keyboard.

Because they can read text a little bit at a time, these commands can open a file more quickly than a text editor like vi . The less command also has some of the advantages of the vi editor, since you can use some vi commands to search through a file.

Each command includes two sets of options. A command like the following sets up the file named bigfile with line numbers :

Once the text file is open, you can run other commands, as described in Table 6.8.

The more and less commands are also known as pagers because they allow you to review text files one page at a time using the Page Up and Page Down keys on your keyboard. When you ve finished, just press the q key to exit from this "browse" mode.

As shown in the output from ls -l , each file is associated with owners , groups, and a series of permissions. (For an example of this setup, see Figure 6.1 .) The permissions associated with a file are assigned to owners, groups, and everyone else on your Linux computer. Take a look at the following entry, which is the output from an ls -l command applied to a hypothetical file named abc :

Permissions are based on the characters on the far-left end of the output. The 10 characters determine what different users can do with this file.

The remaining characters can be grouped in threes. The subsequent three characters shown are rwx . In other words, the owner of the file named abc can read ( r ), write ( w ), and execute ( x ) this file.

The next three characters shown are rw- . Users in the same group as the file owner can read this file ( r ) or edit and write to this file ( w ). These users cannot execute the file.

The final three characters are r ” . Users that don t belong to the same group as the file owner can read this file. They can t write to it, nor can they execute it if it s a script.

You can set up these permissions on any file using the following command:

When you create a new file or directory, the permissions you get depend on the value of what is known as the umask . Type umask at the command-line interface, and you ll see the current numeric masked value of your permissions:

To understand this number, you need a clear idea of the numeric value of permissions. The first number in the umask is currently unused. So the actual umask is 022.