SWAT can seem overwhelming. There is a simpler, though less flexible, way to configure your computer as a Samba server: redhat-config-samba . Install the redhat-config-samba RPM if required, and then run the program with the same name . You should see a tool similar to Figure 29.19. 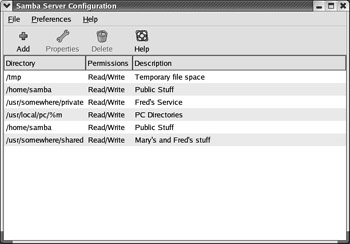 This tool reads its initial settings from your current smb.conf file. The settings you see in Figure 29.19 reflect some of the shared directories from the packaged smb.conf file.

In the following sections, we ll look at configuring basic server settings, managing Samba users, and creating a new share.

In redhat-config-samba , click Preferences ˜ Server Settings to get to the Server Settings dialog box shown in Figure 29.20. As you can see, the basic server settings are simple, and the options should be familiar from previous sections. Since the Workgroup textbox is blank, the workgroup variable is set to the default, which is WORKGROUP; the server comment is "Mike s Samba Server." 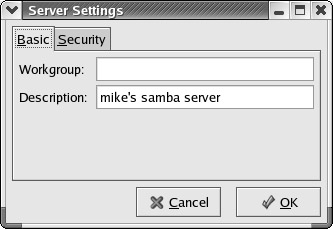 Figure 29.20: The Basic tab of the Server Settings dialog box

Click the Security tab to see several key security variables . Remember, you can select between SHARE, USER , SERVER, or DOMAIN authentication modes. If you ve selected SERVER or DOMAIN, you ll get to specify the name of the authentication server. Most current Windows servers use encrypted passwords. The Guest Account is an account you can designate in /etc/passwd , such as guest or ftp. These options are illustrated in Figure 29.21. 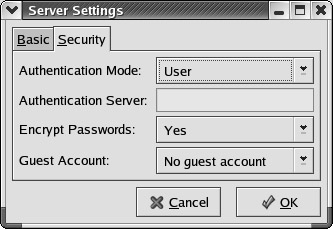 Figure 29.21: The Security tab of the Server Settings dialog box

You can manage users in redhat-config-samba . In this tool, click Preferences Samba Users to get to the Samba Users dialog box shown in Figure 29.22. 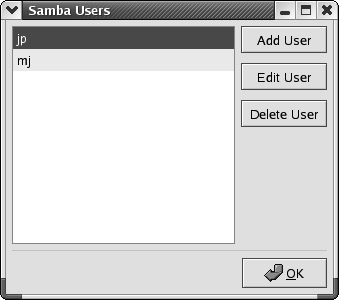 The options are fairly self-explanatory; you can add, edit, or delete users from the /etc/samba/ smbusers database. Click Add User to see the Create New Samba User dialog box. If you remember the discussion on the smbadduser command earlier in this chapter, you ll recognize the text boxes shown in Figure 29.23; the information that you need is identical. 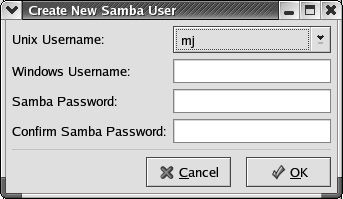 You can add a new directory share with redhat-config-samba . In this tool, click the Add button to reveal the Create Samba Share dialog box. There are several options shown in Figure 29.24. 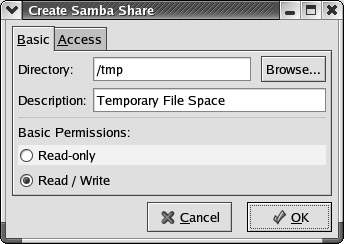 The options are fairly straightforward, but since they don t directly match the variables described earlier, we ve summarized each option under the Basic tab in Table 29.11.