Working with the Basic KDE Interface

The standard KDE desktop has the same characteristics of other major GUI operating systems. It includes a panel, a K Menu button, and icons. You can customize each of these components to meet your own needs; alternatively, you can even configure a standard interface for your KDE installations. You can control and customize KDE s look and feel through the KDE Control Center. If you ve installed and have set KDE as your default desktop, you ll probably start with a view similar to Figure 17.1. 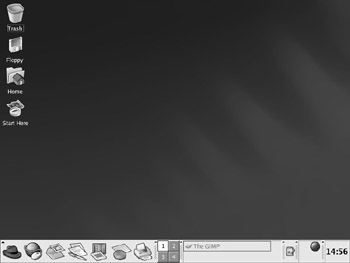 An Overview of KDE

The basic KDE interface is also quite simple. As you can see in Figure 17.1, it includes a Trash icon, a floppy disk manager, direct access to your home directory, and access to a Start Here directory. All of these icons use Konqueror, which is an Explorer -style graphical shell that you can use to manage your files as well as your KDE configuration. While the default Red Hat web browser is still Mozilla, Konqueror was developed by the KDE project.

When you start KDE for the first time, you ll see Kandalf s Useful Tips. These tips are for the most part quite useful even for less experienced computer users.

In the following sections, we ll examine the buttons on the panel and the KDE Control Center.

KDE is flexible. You can place open windows in several different workspaces. So instead of opening and closing windows, you can just switch workspaces to get to your various applications. For example, I can have The GIMP image program in one workspace, the OpenOffice Calc spreadsheet program in a second, a terminal window in a third, and OpenOffice Writer in a fourth workspace. A view of the four workspaces is shown in a thumbnail on the panel, as shown in Figure 17.3. Note that the active workspace is highlighted. 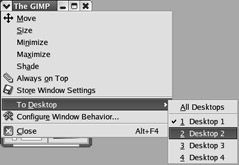 Finally, on the far right of the panel are three more icons. The clipboard with a K is known as Klipper, the KDE clipboard tool, which allows you to copy and paste between applications. To configure Klipper, right-click on its panel icon and select Configure Klipper from the resulting menu.

If you left-click on the time on the panel, you ll see the calendar for the current month; if you right-click on this area, you ll open a menu where you can configure the look and feel of the clock, the time zone, and the format.

It s easy to customize the KDE panel. Right-click on an open area of the panel and select Panel Menu ˜ Configure Panel. You ll see the KDE Control Module window, shown in Figure 17.6. 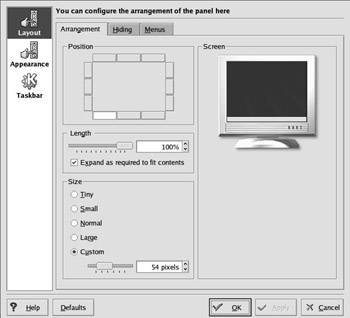 There are a number of things that you can do with the properties of your KDE panel. They are all related to the look, feel, and location of the panel, as well as the contents of the Main Menu commands.

Now we ll take a look at the KDE Main Menu. Click on the red hat in the lower-left corner of the desktop. You should see a menu similar to that shown in Figure 17.7.