Anyone who manages a Linux computer needs to know how to manage processes.

A couple of key tools are available to help you manage Linux processes: who and ps . These commands help you keep track of who is connected and what processes are being run, respectively. In addition, the top command helps you monitor the demands that a service is placing on your computer. Finally, the nohup command can help you run another command and keep it going even after you log off your computer.

If any of your users are having a problem with any application, you can use the kill command to stop that application. If an important program or procedure is about to run, commands such as nice and renice can help you raise or lower the priority associated with the program of your choice.

The ps command shows currently running processes or programs. When you type the ps command by itself, you see the processes associated with your setup. If you type the ps aux command, you can see everything running on your Linux system including daemons. Another useful variation is ps l , which returns a "long list" associated with each currently running process. Important categories from this command are shown in Table 13.5.

The top command helps you identify the programs that are "hogging" resources, specifically your CPU and RAM memory. For example, Figure 13.9 shows what the top command can see on a system with a less than ideal amount of RAM. 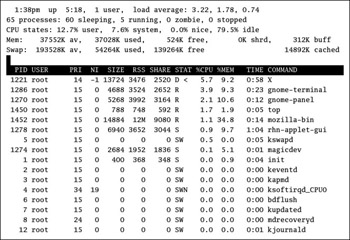 In our example, performance is slow, and you can hear the hard drive working constantly. The output shown in Figure 13.8 suggests that to reduce the load on your hard disk, you should either refrain from running the Mozilla web browser or add more RAM to your system.

If you re running a multiuser system, pay attention to users associated with troublesome processes.

As an administrator, you should check logons regularly; for example, the following output from who shows the same person logged on from two different locations:

Because user mj is logged on from the local computer and remotely from the computer at 136.46.1.64, you should be concerned that someone else is using mj s username and password to break into your system.

By reputation, Linux doesn t crash. There are reports of users and websites powered by Linux running without reboots for months at a time. One reason behind this is that system administrators can manage troublesome programs with the kill command.

For example, if a program like Mozilla locks up on you while you re browsing the Internet, follow these steps to kill the program:

The nice and renice commands let you run programs at different relative priorities. The priority of any program can range from -20 (highest) to 19 (lowest). The nice program starts another process with an adjusted priority. For example, you could set Mozilla to start after all others have finished by using the nice -n 19 mozilla command. If you have to focus Linux on one specific program, you need its PID. Once you find the program s PID (assume it s 1789 for this exercise), you can raise its priority with the renice -10 1789 command.

If you can t run a program with the priority that you want, the nohup command can help. With nohup , you run a long command just before leaving your computer. For example, say you want to record an .iso file to a CD. You know that CDs take some time to record, but you need to pick up your child from school right now.

If your computer includes a CD recorder, the nohup command can help. If you want to take the redhatcd1.iso file and record it on a blank writeable CD, run the following command and log out of your user account, and the CD recording process will proceed automatically. Messages are written to the nohup.out file in the local directory.

This assumes, of course, you don t shut down Linux on your computer. More information on the cdrecord command is available in the next chapter .