Everything in Linux can be reduced to a file. Partitions are associated with filesystem device nodes such as /dev/hda1. Hardware components are associated with node files such as /dev/dvd. Detected devices are documented as files in the /proc directory. The Filesystem Hierarchy Standard (FHS) is the official way to organize files in Unix and Linux directories. As with the other sections, this introduction provides only the most basic overview of the FHS. More information is available from the official FHS homepage at www.pathname.com/fhs.

Several major directories are associated with all modern Unix/Linux operating systems. These directories organize user files, drivers, kernels, logs, programs, utilities, and more into different categories. The standardization of the FHS makes it easier for users of other Unix-based operating systems to understand the basics of Linux.

Mounted directories are often known as volumes, which can span multiple partitions. However, while the root directory (/) is the top-level directory in the FHS, the root user's home directory (/root) is just a subdirectory.

A Variety of Media Devices

Making Reference to Devices in /dev

Take a look at the files in the /dev directory. Use the ls -l /dev | more command. Scroll through the list for a while. The list actually used to be longer. Well, there's a method to this madness. Some devices are linked to others, and that actually makes it easier to understand what is connected to what. For example, the virtual device files /dev/cdrom and /dev/dvd are easier to identify than the true device files. Generally, these devices are automatically linked to the actual device files during Linux installation. For example, if you have a printer and DVD writer installed, the following commands illustrate possible links between these components and the actual device files:

Three basic tools are available to manage the filesystem on various partitions: fdisk, mkfs, and fsck. They can help you configure partitions as well as create, check, and repair different filesystems.

Yes, there are more options, such as parted. But this chapter covers only the very basics as described in the Red Hat prerequisites; for more information, see the man page associated with each respective command tool.

Throughout the book, I'm assuming that you're running commands after having logged in as the root user. While it may not be the best practice on the job, it can save you a little bit of time on the RHCT and RHCE exams. For example, if you've logged in as a regular user, you'd start fdisk with the /sbin/fdisk command. This applies even if you've taken administrative privileges with the su command. (I know, you could take administrative privileges with the root user PATH with the su - root command, but time is of the essence on these exams.) On the other hand, if you log in as the root user, you can take advantage of a different $PATH, which means all you need to type is fdisk.

The Linux fdisk utility is a lot more versatile than its Microsoft counterpart. But to open it, you need to know the device file associated with the hard drive that you want to change. Identifying the hard disk device file is covered in Chapter 2. Assuming you want to manage the partitions on the first SCSI hard disk, enter the following command:

As you can see in Figure 1-3, the fdisk utility is flexible. Some key fdisk commands are described in Table 1-3. 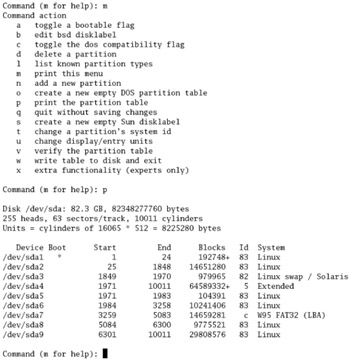 To format a Linux partition, apply the mkfs command. It allows you to format a partition to a number of different filesystems. To format a typical partition such as /dev/hda2 to the current Red Hat standard, the third extended filesystem, run the following command:

The fsck command is functionally similar to the Microsoft chkdsk command. It analyzes the specified filesystem and performs repairs as required. Assume, for example, you're having problems with files in the /var directory, which happens to be mounted on /dev/hda7. If you want to run fsck, unmount that filesystem first. In some cases, you may need to go into single-user mode with the init 1 command before you can unmount a filesystem. To unmount, analyze, and then remount the filesystem noted in this section, run the following commands:

Configuring One Filesystem on Multiple Partitions

The Logical Volume Manager (LVM) enables you to set up one filesystem on multiple partitions. For example, assume you're adding more users and are running out of room in your /home directory. You don't have any unpartitioned space available on your current hard disk.

With the LVM, all you need to do is add another hard disk, configure some partitions, back up /home, and use the LVM tools to combine the new partition and the one used by /home into a volume set. You may need to install the LVM RPM package. Once it is installed, the steps are fairly straightforward, as described in the following exercise.

LVM is more important than the prerequisite skills covered in most of this chapter. The latest available Red Hat Exam Prep guide includes LVM requirements on both parts of the RHCE exam. For more information on LVM, see Chapters 2 and 8.

I describe this process in more detail in Chapter 8.

The mount command can be used to attach local and network partitions to specified directories. Mount points are not fixed; you can mount a CD drive or even a Samba share to any empty directory where you have appropriate permissions.

There are standard mount points based on the FHS. The following commands mount a floppy with the VFAT filesystem, a CD formatted to the ISO 9660 filesystem, and a Zip drive. The devices may be different on your system; if in doubt, look though the startup messages with dmesg | less.

Other mount points are available through the automounter. Once configured, other systems and even shared network directories can be mounted as needed. For more information, see Chapter 4.