Linux and Unix are managed through a series of text files. Linux administrators do not normally use graphical editors to manage these configuration files. Editors such as WordPerfect, OpenOffice.org Writer, and yes, even Microsoft Word normally save files in a binary format that Linux can't read.

Popular text editors for Linux configuration files include nano, pico, joe, and vi. If you already know one of these editors, feel free to skip this section. If you have to rescue an RHEL 5 system (as may be required during the exam), you'll have access to these editors when booting your system from RHEL 5 rescue media.

While emacs may be the most popular and flexible text editor in the world of Linux, I believe every administrator needs at least a basic knowledge of vi, which may help you save a broken system. If you ever have to restore a critical configuration file using an emergency boot floppy, vi is probably the only editor that you'll have available.

In reality, RHEL 5 uses an enhanced version of the vi editor, known as vim. And as RHEL emergency boot media access installation packages, it supports more console-based editors. I describe vi here simply because it's the editor I know best.

You should know how to use the two basic modes of vi: command and insert. When you use vi to open a file, it opens in command mode. Some of the commands start insert mode. Opening a file is easy: just use the vi filename command. By default, this starts vi in command mode. An example of vi with the /etc/inittab file is shown in Figure 1-1. 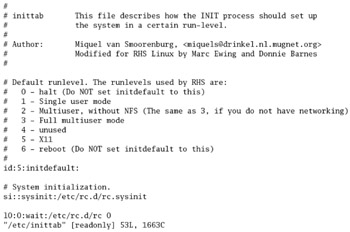 The following is only the briefest of introductions to the vi editor. For more information, there are a number of books available, as well as an extensive manual formatted as a HOWTO available from the Linux Documentation Project at www.tldp.org. Alternatively, a tutorial is available through the vimtutor command.

In command mode, you can do everything you need to a text file except edit it. The options in command mode are broad and varied, and they are the subject of a number of book-length texts. In summary, vi requires seven critical command skills:

In modern Linux systems, editing files with vi is easy. Just use the normal navigation keys (arrow keys, PAGE UP, and PAGE DOWN), and then one of the basic commands such as i or o to start vi's insert mode, and type your changes directly into the file.

When you're finished with insert mode, press the ESC key to return to command mode. You can then save your changes or abandon them and exit vi.

In this exercise, you'll create a new user by editing the /etc/passwd file with the vi text editor. While you could create new Linux users in other ways, this exercise helps you verify your skills with vi and at the command line interface. 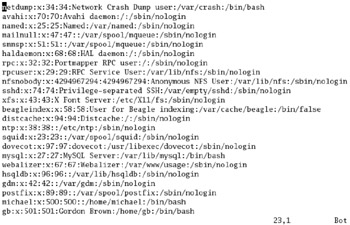 You can use any available text editor during the Red Hat exams. But do not count on any GUI text editors, as the GUI may not be available for troubleshooting during the exam, or in real life.