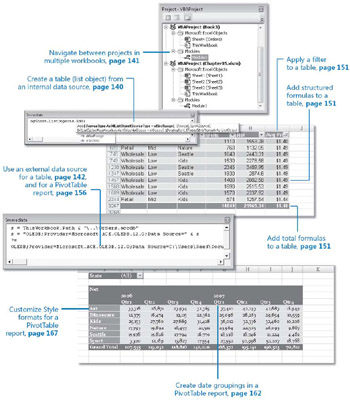 On May 29, 1913, at the staid Théatre des Champs-Elysées in Paris, a scene of utter chaos occurred. It was the premiere performance of Igor Stravinsky's ballet “The Rite of Spring.” The Stravinsky music and Nijinsky choreography was so outrageously original that the audience couldn’t comprehend it. Today, “The Rite of Spring” is performed withoutany commotion, but Igor Stravinsky is still considered to be one of the most inventive composers ever. Stravinsky, however, acknowledged that he was influenced of others.

He once said, “Lesser artists borrow, great artists steal.” The term steal is of course used for dramatic effect, but the point is that when you borrow, the item still belongs to the original owner, but when you steal, you make it your own.

In this chapter, you’ll see how you can use the macro recorder as a reference tool for learning how to work with Excel objects. You’ll record actions, but when it’s time to write the macros, you won’t modify the recorded macros. Instead, you’ll create your own macros, taking full advantage of object variables and methods and properties that the recorder doesn’t use. In essence, you’ll learn how to steal.