Now that Alicia understands how to do her animations in PowerPoint 2000, it's time to move to PowerPoint 2002. This version revolutionized the way animation works for objects on slides. There are now three different classifications of animations:

Another addition is the animation timeline. Instead of object animation being limited to a single linear timeline, animations and effects can now happen in a non-linear manner. Multiple animation streams can occur at once. Single objects can have more than one animation effect applied.

Oh, and did I mention speed can now be controlled on a much finer basis? Each effect has a more detailed set of timing options. For example, you can more finely adjust the speed at which effects occur, including the fly and crawl speeds.

Sound confusing? It isn't. Let's work through the whale examples and see how much easier they are to create with the new animations.

To demonstrate the new animation effects, we are going to create a slide showing how the change of seasons impacts the krill in each area. As in previous versions, you need objects to animate. Our object is a shape representing the krill population. Before animating the population, it is a blob next to the spring migration location, as shown in Figure 6-11: 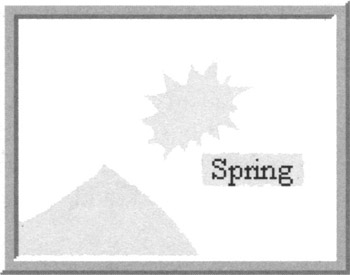 We are only going to work through the spring krill arrival. If you wish, do the others for practice.

Click on the krill star. Open the custom animation pane, either via the Slide Show menu or the right-click menu.

Under Add Effect, select Entrance ’ More Effects. From the Moderate list, select Stretch. Set the stretch to occur From Bottom and Slow. On the options, ensure the effect starts on-click. 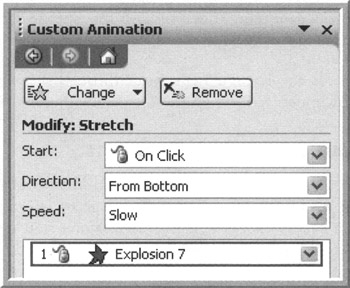 The star on the slide has a 1 in a gray box next to it. The 1 indicates this shape has an animation attached and it will animate first in the sequence of slide actions. From here on, every time an animation is set up on an object to be activated with a click, the object is assigned a number. These numbers make it much easier to find and follow the order of the animations.

Third Step: Make The Krill React To The Temperature Change

Select the star again. We want it to darken. To add the darken effect, click anywhere in the animation pane (but not on one of the listed animations). This leaves the star selected, but no animations selected. Now add an emphasis effect of Change Fill Color. This effect is under the Basic effects list of Emphasis ’ More effects. Use the drop-down for the fill color option to select the new color. Set this animation to occur after the previous animation. 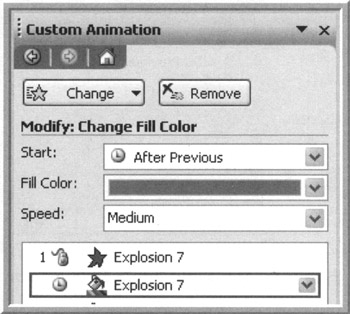 Select the star one more time to add an exit effect. The star will exit by contracting slowly after the previous effect has finished. After adding the exit effect, the effects list should look like Figure 6-14: 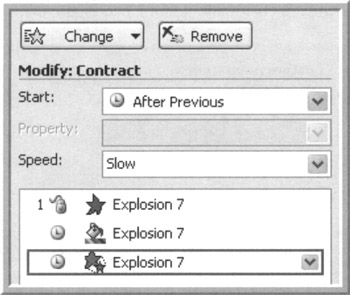 To have multiple polls of krill, copy the star after applying the animations and paste it wherever else the krill will appear. The animations are copied along with the object. To make them appear at different times, change the timing and start options to the desired setup.