Animations In PowerPoint 2000 And Earlier

Alicia's original slides were quite boring. For example, her definition slides looked like this:

The first thing to do is to change the slide so it only contains the words to be defined. Because we are adding action to this slide, we are also going to tell the students how to access the additional information.

PowerPoint 2000 only allows objects to appear and disappear in a set order. To make PowerPoint do what we want, we need to fool the students into seeing what we want them to see. 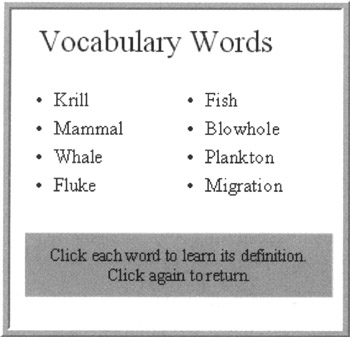 This main slide is linked to a series of other, almost identical slides that show each individual definition on the screen. By linking each slide to a word, clicking any word appears to make a box with its definition appear. Clicking a second time returns to the word list. Using this process, the students are fooled into believing the definitions appear and disappear, no matter what order the words are clicked.

What we are going to do is to make it impossible to tell we have changed slides. PowerPoint animation works much like an old-fashioned child's flipbook. As long as the background stays the same, making small changes in slide objects allows the viewer to see movement.

In this case, we are going to move from the slide in Figure 6-2 to a slide containing the definition of the word krill.

When we click on the word, the definition box appears. When done with the animation, we click again. This returns us to the word list slide. The effect is the box disappears. Since the animation of the definition for krill is now on a separate slide, we can do things outside of a linear timeline and make it appear everything is happening on the same slide.

Let's create a sample definition slide so you can see exactly how this is going to work. First, create a presentation containing the word list shown above. Next , use Insert ’ Duplicate Slide to create a copy of the slide.

On the first duplicate slide, add an autoshape box or circle and enter the definition for the first term (krill). Since we want the words to zoom out on the slide, make the autoshape into a 3-D shape. The final slide looks something like this: 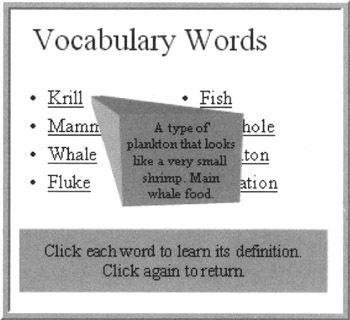 We are now ready to make the box and the graphic appear. Go to the Custom Animation window and set up the definition shape and the graphic to appear after no delay, using the Zoom from center effect. This causes both items to enter as soon as the slide comes up. Test the slide to make sure it works.

Once the slide is working, create a custom show containing just this slide (see Custom Shows in Chapter 3). Once the custom show is created, hide each of the definition slides so they do not play when the presentation is run.

Finally, we need to be sure everyone knows there is more information available on the word krill. To do this, select the word and create a hyperlink to the custom show containing the new slide. When creating the hyperlink, be sure the Play and Return box is checked. Then, the word krill might look like this:

After creating the link, the word Krill changes color and becomes underlined . This indicates the word contains a hyperlink. To make sure the linked slides still look the same as the original slide, select the rest of the vocabulary words and underline them.

When the word krill is clicked, PowerPoint bring up the new slide, runs the animation and waits for a mouse click. When clicked again, PowerPoint returns to the main presentation so the presentation can continue on.

Tip 27: Apply this to built slides

Using this technique on built slides? After duplicating the slide, delete any text not showing on the screen. This situation is more likely to appear when presenting the presentation yourself than when someone else is working through the presentation automatically.

One Slide, Many Tips?

Create a link, a custom show and a hidden slide for each tip. In our case, after creating all the links the main slide would look like this: 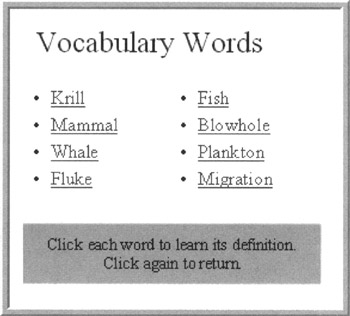 To set up several pictures to appear and disappear on the same slide, use the Hide on Mouse Click options on the custom animation pane. Animate each picture to appear in order with the animation desired and the hide option set. When someone is viewing the presentation, clicking on a picture makes it disappear and makes the next one reappear.

Want this to happen automatically? Instead of setting the animations to happen on mouse click, set each one to happen after a set time has passed.

Create A Review With Animation

The same technique can be used to make the whale's anatomy slide into a review instead of just a presentation of the information. This slide lets the students know if the answer they provide is the right one or the wrong one.

To do the review, Alicia displays the main slide. When she points to a box, the students call out an answer. By clicking in various places, Alicia can let the students know if they gave the right answer or not.

Make a slide with a large picture of a whale. Create callouts next to several elements of the whale's anatomy, such as the teeth, the flukes, the tail and so forth. Figure 6-5 is the base slide. 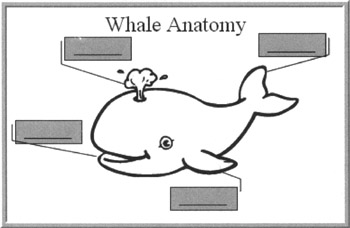 For each callout, make another slide brings up the right answer. For the fluke, this slide would look like Figure 6-6: 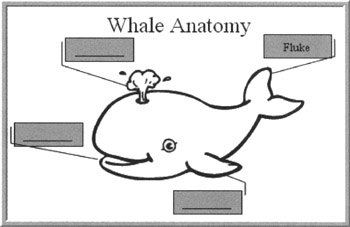 In addition, create a slide with the whale with a graphic over it that says "Wrong answer." This slide would look like Figure 6-7: 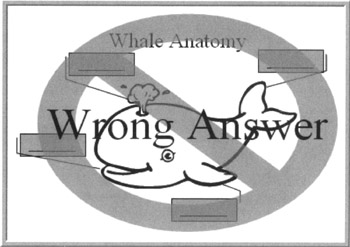 Create a custom show for each of these slides and then hide them.

We don't want the students to know where we are going to click because clicking will bring up either a confirmation of the answer or the wrong answer slide. However, we want the transfer between slides to be seamless. To do this, we need to create links to the right and wrong answer slides.

Link each of the callouts to the correct custom show. Create an empty box and copy it three times. Drag one extra box to each corner of the slide. Link each box to the wrong answer slide.

Running the main slide show allows you to bring up the confirmation slides and the wrong answer slide in any order desired.

Taking The Animation One Step Further

Alicia's definitions now work much better. It is time to move on to the slide with the migration path of the whales.

We can achieve the movement by creating one slide with many objects, each a little different from the one before. We use a variation of this method to create the seasons slide. Another method is to create one slide, which contains many objects appearing and disappearing in succession to depict movement.

One Slide, Many Objects

Using a single slide with many copies of the same object works best when all the objects to show at the end of the slide.

The four migration paths need to appear in succession and clicking each location brings up the slide moving the whales from one location to the next.

Place the whales and season names at the appropriate locations along as shown in Figure 6-8: 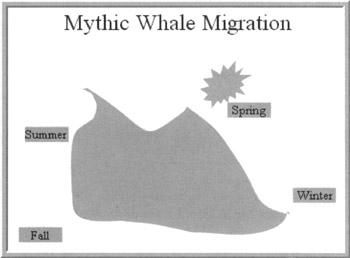 Because we want the whale and the season to appear at the same time, group each pair together. 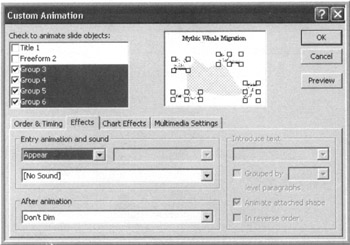 Many Slides, One Object

Using one slide for each movement works best when you want only one object on the slide at any time. This technique makes it easier to select and work with the correct item for animation.

Use Insert ’ Duplicate slide from the migration slide to create the base slide for each show. Set each slide to transition automatically after zero seconds to the next slide. Hide each of these four slides. Do the following process for each season:

Verify the slides work as intended, then repeat the process for each of the other three season changes.

After completing the creation of all four custom shows, test out the slide show. Entering the migration slide should bring up just the background. After eight seconds, the four migration locations will be on the screen. Click a season and the whales move from one location to the next.

To make objects appear in what appears to be random locations, place each object in a different spot on the slides, rather than right next to each other. Animate them in the order desired. The audience will not know what the order is and will believe the object appearances are random.

At first glance these two effects would seem the logical choice for creating the effect of something marching across the screen. In some cases, it does work. However, both animation effects have the limitation that the timing cannot be controlled. Fly is always very fast, crawl is always very slow. If these are the right speeds, use them.