In this lab, you’ll test PortFast and UplinkFast on the network; then you’ll configure the 4000 series switch as an STP root and add EtherChannel between the 4000 and 2950 switches. Figure 5.2 shows the network configuration used in this lab. Make sure the configurations of your switches are deleted and the default STP configuration is on both switches. 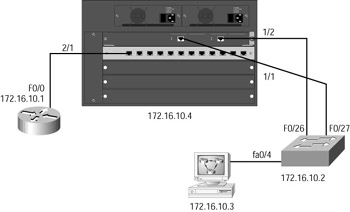 Configure both the 4000 series switch and the 2950 switch with the hands-on labs from Chapter 2, “Connecting the Switch Block,” and Chapter 3, “VLANs, Trunks, and VTP.” Each switch should have the hostname, interface descriptions, passwords, VTP domain information, and VLANs configured and trunk links on. Test by pinging from the workstation to the 2950 and 4000 switch.

Beginning Cryptography with Java
Postfix: The Definitive Guide
Introduction to 80x86 Assembly Language and Computer Architecture
Making Sense of Change Management: A Complete Guide to the Models, Tools and Techniques of Organizational Change
Data Structures and Algorithms in Java
802.11 Wireless Networks: The Definitive Guide, Second Edition
flylib.com © 2008-2017.
If you may any questions please contact us: flylib@qtcs.net
Privacy policy
This website uses cookies. Click here to find out more.
Accept cookies