STRPRTWTR and ENDWTR perform "hard" starts and stops because they start and end a job in subsystem QSPL. You can use the Hold Writer (HLDWTR) and Release Writer (RLSWTR) commands to temporarily suspend printing.

HLDWTR stops activity on the printer without ending the spool writer job in QSPL. Conversely, the RLSWTR command restarts printer activity without starting a new job in QSPL.

Printer writers can be changed without having to end (ENDWTR) and restart them (STRPRTWTR) using the Change Writer (CHGWTR) command. The CHGWTR command has almost the same set of options provided by the STRPRTWTR command, so you don't need to end the writer and restart it if you want to change some of the options.

Printer writers also communicate printer problems to the system. For example, the printer might run out of paper, have a paper jam, or be presented with a report that is set to a different form type than the one currently installed.

In these situations, the writer doesn't know what to do, so it sends a message to indicate the problem. The message goes to whatever message queue you specified in the MSGQ parameter when you created the printer device description (QSYSOPR or something else).

The STRPRTWTR or CHGWTR commands can override that setting and force the writer to send the messages to a different message queue. You should not do this because it creates confusion.

For example, suppose that printer INVPRT01 stopped for no apparent reason. You suspect there is a problem and to confirm (or refute) your suspicion, you display messages for that printer. You have set up INVPRT01 so that its messages go to a message queue of the same name:

The message you need to reply to should be the last one, and should look something like the panel presented in Figure 5.7. 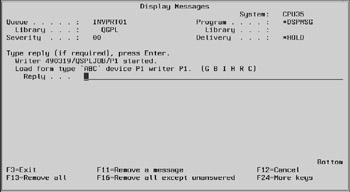 If you are signed on and want to have the system display the printer messages automatically, put the printer's message queue in break mode. For example, if you want to keep an eye on printer SYSPRT02, whose messages go to message queue PRINTERS, enter:

If another printer uses the same message queue, and that printer runs out of paper, you will get that message as well. You can see now why it might be to your advantage to set up a different message queue for each printer.