In its simplest form, overriding operates much in the same way in CIM and either methods or properties may be overridden:

The property ShortName overrides (i.e., replaces ) the property Name when instances of the class Subclass are being addressed. In this definition I have taken the opportunity to restrict the maximum length of the name to 15 characters and this is a very common use of the Override qualifier. 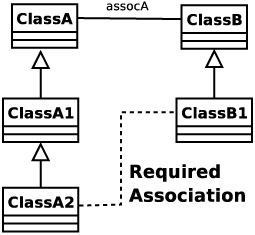 By the time we reach the subclasses ClassA2 and ClassB1 we want to make use of this association but now we can give much more useful names to the endpoints. We can therefore override the association thus:

We have tightened up the names and added the additional restrictions of max (1) and min (1).

These two examples illustrate one of the conditions of overriding ”you can only constrain the overridden entity more tightly, you cannot loosen it. Thus an unconstrained string as in my first example can have its length constrained to 15 characters or an association without constraints as in my second example can be constrained to max (1) but it would not be possible to specify the opposite .

To prevent overriding from constraining a property (or method ”anything that I say here about properties is also true of methods) there is a flavor which may be attached to a qualifier: DisableOverride . For example, the Association qualifier is defined as follows :

which prevents anything which inherits from a class with the qualifier Association from removing that qualifier.