Windows applications very often use dialog boxes to communicate with the user. You can either use one of the common dialogs or create your own. Common dialogs are described later in the book.

A dialog box is nothing more than a customized form. If you want to have a non-resizable dialog box without an icon on the title bar, you only have to set the BorderStyle property to bsDialog. 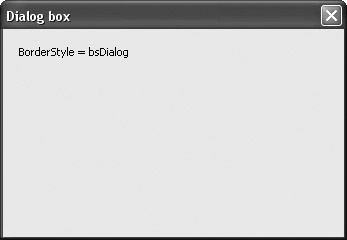 If you want to have a dialog box that more closely resembles, for instance, the Project Options dialog box that can be resized or has an icon in the title bar, you have to do the following:

Now, let's create a dialog box that will enable the user to change the color of the main form. Add a TLabel component and two TButton components and modify them to resemble the ones displayed in Figure 12-21. 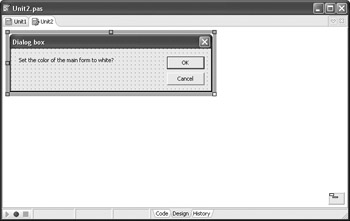 The following code shows how to use this dialog box to enable the user to modify the color of the main form. 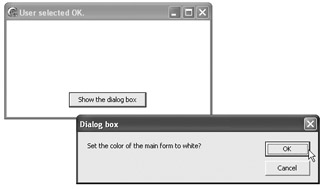