To add a new form to the project, select File ® New ® Form - Delphi for Win32. The IDE automatically displays the second form on the Designer Surface. You can add components to the form and write code for the form, but you can't access the form from other units, at least not yet. To access the second form from the main form, you have to add the form to the uses list of the main form.

To add the second form's unit to the uses list of the main form, do the following:

When you click OK in the Use Unit dialog box, the IDE adds the selected unit to the uses list of the main form. But that uses list resides in the implementation section of the unit. The IDE does this to avoid circular references between units. The uses list in the interface section of the unit should only contain references to essential units or units that contain code that you have to use in the interface section.

If you're building a C++Builder VCL Forms application that has multiple forms, use the File ® Include Unit Hdr option to include another form's unit. The IDE will display the Use Unit dialog box, and when you click OK, it will add the #include directive after the #pragma hdrstop directive:

The TForm class provides two methods for displaying forms: Show and ShowModal. The Show method simply displays the form. It is used when you want to display and work with several forms at the same time. 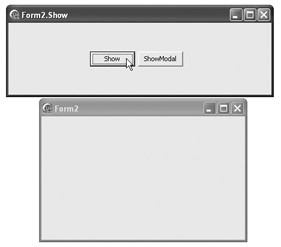 Here is the code for the Show and ShowModal buttons:

For instance, to copy the text typed in a text box to a text box on another form, we have to do the following:

Listing 12-11A: The main project file of a Delphi VCL Forms application

Listing 12-11B: The main project file of a C++Builder VCL Forms application

The application uses the CreateForm method to create the forms automatically at startup. The CreateForm method accepts two parameters: the name of the class that is to be instantiated and the actual form variable. In C++Builder, the reserved word __classid must be used to work with classes directly.

The ability to automatically instantiate forms at application startup enables us to quickly build application prototypes or, in some cases, to build entire applications without having to worry about creating and destroying the forms.

Another, more serious reason why we should avoid automatic form creation in large applications is memory consumption. Since our application is only one of many that are concurrently executed in the OS, you should use system resources judiciously. Therefore, having all forms created at application startup is not the best solution.

If it's possible, you should create a form dynamically only when you need it and remove it from memory as soon as you're done with it. The following code shows how to dynamically create, display, and destroy a form. 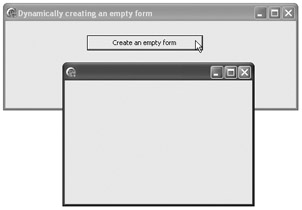 When you dynamically create a modal form, the owner component isn't absolutely necessary because the form gets immediately released from memory when the user closes it. Thus, you can pass nil to the form's constructor to create the form a bit faster.

Listing 12-13: Creating a form without an owner

To manually remove the form from the auto-create list, do the following:

The Project Options dialog box provides a user-friendly way to manage auto-created and available forms. Forms listed under "Available forms" aren't automatically created at application startup, but they can be dynamically created. 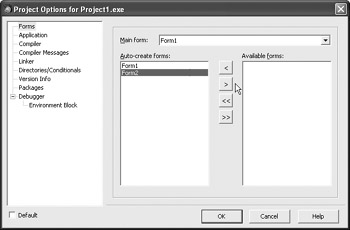 To dynamically create the second form, do the following:

Forms, like all other components, have to be created using the new operator. To delete a dynamically created form (component), you don't call Free like you do in Delphi. Instead, you use the delete operator:

To see how to dynamically create a modeless form, first create a new VCL Forms application project and add a second form to it. After you've added the second form, remove it from the auto-create list in the Project Options dialog box and add it to the uses list of the main form.

When creating a modeless form, you mustn't call the Free method after you call Show because modeless forms allow further statements to be executed. Thus, if you call Free immediately after Show, the modeless form will be created, displayed, and automatically released from memory.

The caFree value is one of the values in the TCloseAction enumeration that enables us to define what should happen when a form is closed. When you assign caFree to the Action parameter, the form is closed and immediately released from memory.

Although the code that creates and destroys the modeless form works great, there is a small problem: Another instance of the TForm2 class is created every time the user clicks the button and the Form2 variable only points to the form that was created last.

If you only want to have a single copy of the modeless form (which is almost always the case), you have to determine whether the form exists before you call the constructor. The best way to see if a form (or any other object) is nil is to use the Assigned function, but you can also perform the test manually by comparing the form (object) variable to nil. Listings 12-17A and 12-17B show how to do this in both Delphi and C++.

Listing 12-17A: Creating the form only if it doesn't exist

Listing 12-17B: Creating the form only if it doesn't exist, C++ version

We are still not finished. Currently, the code only works once. If you create the form once, then close it and try to create it again, you will get an error because when an object is destroyed, the object variable isn't set to nil. So, select the second form in the IDE and change the OnClose event handler to this:

Listing 12-18A: The proper way to destroy a modeless form

Listing 12-18B: The proper way to destroy a modeless form, C++ version