In this chapter we've used the Tomcat server log file as a central holding area for debug messages from the filter and the event listener. That was simple to do but it was not without its problems:

For the full picture of what's happening in our servlets and container it would be best for all debugging messages to be channeled through to a common file or a real time analyzer.

We haven't used any of the new features available in J2SE version 1.4 so far, but if you are using that version, or will be soon, then there's some good news. Its Logging API allow you to send debug messages to a Logger object, which publishes those messages (LogRecord objects) with the help of a Handler object. The various styles of publication, such as writing to a file or sending to a remote monitoring process, are handled by the various types of Handler:

Coupling the Debugging Components with J2SE 1.4

What it will do is provide a standard coupling mechanism for debugging components. The following diagram shows how the components we've developed could be connected via the Logging API: 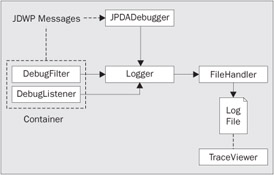 Formatting the Debugging Output with J2SE 1.4

We wrote our debugging output with embedded tags in order to make the results suitable for further processing. As a consequence, the logged output was not very readable until we looked at it using the TraceViewer class.

The Logging API can help us out there because it supports the idea of Formatters that render the debugging output in various ways. You can write your own Formatters or take advantage of the two that are supplied by default:

The following listing shows some typical output using XMLFormatter (which is similar to what we produced):

We'll round off the chapter with an idea for enhancing the software that we've developed so far.