Up to this point in the book, you have worked mostly with components that were already set on the stage. However, typically you'll want to create an instance of a component by dragging the component either from the library or from the Components panel.

Whenever you have components on the stage, Flash will automatically place them in the library just like any other symbol (such as movie clips, buttons, and the like). One obvious way to create a new instance of a component is to drag it from the library onto the stage. 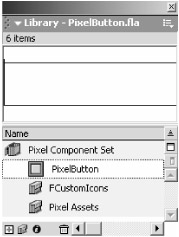 You wouldn't be able to see this button on the stage without Live Preview. Typically, you would have to publish a movie to view the results of code used to draw shapes. However, Live Preview lets you see the button without publishing the movie.

If you do not have Macromedia Extension Manager installed, take a few moments to install it and open it. Extension Manager will recognize any Macromedia program on your system that supports extensions it can manage. Therefore, the first thing you'll need to do is make sure that Flash MX is selected (see Figure 4.20). 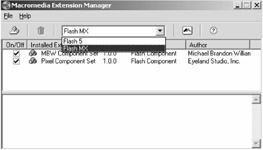 Click the Accept button. After you do, Extension Manager displays a dialog box letting you know the components have been installed. Click the OK button.

We will be installing more MXP files in later chapters, and we will take another look at Macromedia Extension Manager once we've installed a few more components. For now, close Extension Manager. If you have Flash MX open, save any files you have open, close Flash, and then reopen Flash to get the changes made by Extension Manager to take effect.

Flash opens with an untitled document, and this will work just fine for our purposes. Open the Components panel either by selecting Components from the Windows menu or by pressing Command/Ctrl+F7. 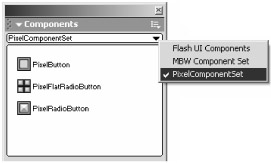