The Feel of a Custom UI

If you are familiar with plug-ins for programs such as Adobe Photoshop, this may not be as problematic or intimidating as you might think. Like plug-ins, components are essentially custom-built features. Since anyone can create these features, the interfaces used to control them can have wildly different looks and feels.

Figures 3.1 and 3.2 show the interfaces for two popular plug-ins for Photoshop (and Photoshop-compatible applications): Xaos Tools' Terrazzo and Procreate's KPT Effects. These plug-in interfaces have very little in common. Photoshop users, however, are used to adapting to or figuring out such plug-ins. Part of their appeal, in fact, is that they are fun to look at and play with. 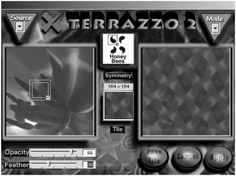 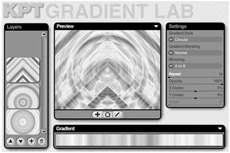 Even wild Photoshop plug-in interfaces, however, take advantage of interface elements that most people are familiar with. For example, look carefully at Figures 3.1 and 3.2. Notice that each plug-in interface features an Opacity setting that is controlled with a slider. This is because host applications like Photoshop also use sliders for their opacity settings (see Figure 3.3). Although there are slight stylistic differences between the plug-in sliders and the slider in Photoshop, the fundamental functionality is the same. 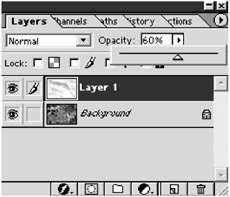 Figures 3.4 through 3.7 show several examples of custom interfaces for the component parameters of various components. All of these custom interfaces are by Eyeland Studio and show somewhat of a progression. Each new UI reflects improvements we added to our custom UIs based on lessons learned.

For example, notice that all of the fields in the custom UI shown in Figure 3.4 are standard text fields. These fields are similar to the default value fields in the default user interface for the Component Parameters panel. Several of the parameters in Figure 3.4 allow for only true or false as the available values. Because this was one of our first custom UIs, we didn't utilize the List value type. Consequently, this custom UI has little value over the default UI. 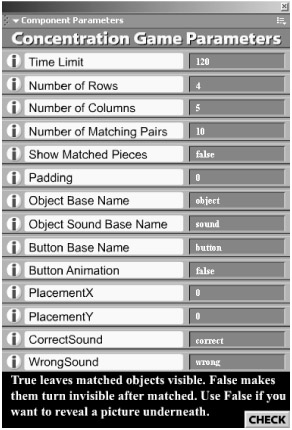 Figure 3.4: A custom UI that creates a concentration game

A few additional features are provided by the custom UI shown in Figure 3.4. Notice the circular icons to the left of each parameter. When the user rolls over these icons, a short description of the parameter is shown at the bottom. This provides the user with information that the default UI could not provide. Also notice the Check button at the bottom right; it allows the user to check if the values they set for the parameters will work with the component. The Check button is a small, added benefit that frees users from the trouble of testing the movies to determine if their chosen parameters will work properly. 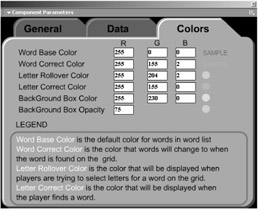 Although the custom UI shown in Figure 3.5 provides the freedom to add more parameters, it still does not offer many advantages over the default UI. Once again, we built in help information, placing it below the RGB color entry fields, but the RGB value entry fields don't even provide as many options as the default user interface.

The custom UIs shown in Figures 3.6 and 3.7 provide a much better solution. In Figure 3.7, you can enter RGB values or use standard HSB sliders and view the results in real time. Both of these custom UIs also provide standard sliders for specifying the values of some parameters. The sliders provide a benefit over the default UI because they show the user clear limits for the values of a parameter. 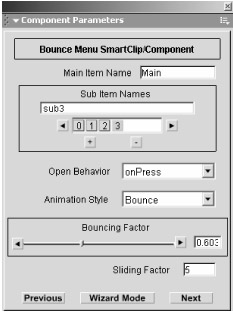 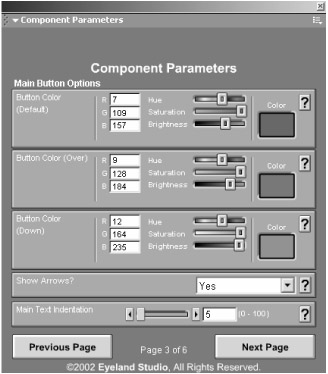 For example, let's say you have a parameter for which users need to specify a value between 0 and 255. If you use the default UI, you would probably use either the Default or Number value type fields. Either of these value types allows users to enter any value. If users aren't clear on what the parameter is for, they could easily enter a value of 500, which could potentially cause problems.

If you use a slider in a custom UI, then you can establish a range for that parameter. One end of the slider (usually the left end) would be the low value, and the other end would be the high value. Therefore, users could not specify values that won't work with the component.

The custom UI shown in Figure 3.7 features pop-up help fields. At any time, users can roll over the buttons with question marks to receive information about the associated parameter. Therefore, users don't have to bother with going back and forth between advanced and wizard modes as they do in Figure 3.6.

Both Figures 3.6 and 3.7 are examples of custom UIs that offer users clear improvements over the default UI. Each of these custom UIs provides information on each component parameter. They also offer improved methods for entering values for the parameters.

In addition, both custom UI examples look and operate similarly to dialog boxes and panels found in Flash (for the most part). Notice that Figure 3.7 displays the name of the parameter in a very consistent place. Each parameter is also clearly sectioned off from the other, which helps to minimize confusion. These subtle, stylistic features help to make the custom UI less intimidating and more intuitive to use. Most of the examples featured in this book use custom user interfaces similar to those shown in Figures 3.6 and 3.7.