Getting Started with UserForms

The best way to get started with UserForms is to create a simple macro that opens a custom dialog box and uses it to display information. In this section, you'll create a music trivia macro that asks the user a simple question about a popular rock-and-roll instrument. Along the way, you'll learn the three fundamental steps of creating a Visual Basic UserForm: designing the user interface, setting properties, and writing event procedures.

NOTE The process used to create UserForms is identical in Microsoft Word, Microsoft Excel, and Microsoft PowerPoint. You'll find the same toolbox controls and property settings in each application.

Whenever a UserForm is active in the Visual Basic Editor, a palette of toolbox controls also appears in a window, which allows you to add programmable interface objects to your UserForm. (See Figure 40-1.) If you have used a drawing program such as Paint, you have many of the skills you need to use toolbox controls. To build the interface objects, you click a control in the toolbox, and then you draw the interface object by dragging with the mouse. This task is usually a simple matter of clicking to position one corner of the object and then dragging to create a rectangle that's exactly the size that you want. After you create the object— a text label, for example— you can resize it by using the selection handles, or you can relocate it by dragging. You can also resize or move the UserForm itself to create a dialog box in exactly the size and location you want. 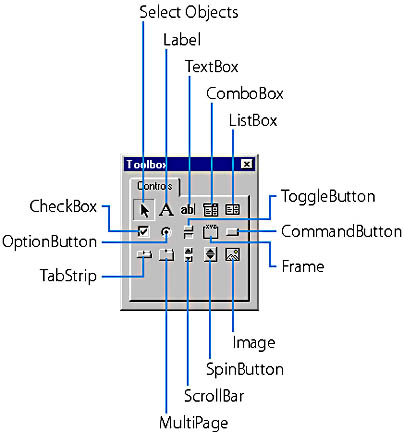 Follow these steps to create a UserForm using the Label, Image, and CommandButton controls:

TIP To learn the name of a control in the toolbox, hold the mouse pointer over the control until its tool tip appears.

Figure 40-2. A UserForm with five objects.

Follow these steps to set properties in the MusicTrivia macro's UserForm:

ON THE WEB The Guitar.bmp graphic is located on the Running Office 2000 Reader's Corner page.

If you select the Guitar.bmp file, you'll see the photograph of a hip Seattle bass player now in the image box. (Look closely— he's currently demonstrating the slap-bass technique.)

You're finished setting properties for the macro.

Figure 40-3. The completed user interface of the MusicTrivia UserForm.

The final step in creating a UserForm is writing the program code for the interface objects on the UserForm. Fortunately, most of the objects on a UserForm already know how to work when the macro runs, so you just need to add the final touches using a few carefully designed event procedures. An event procedure is a special routine that runs when an object on your form is manipulated at run time. (Technically, event procedures run when a specific event is triggered in the macro, such as a click, a double-click, or a drag-and-drop operation.) UserForm event procedures use the same Visual Basic macro language that you're familiar with, so you'll have little trouble figuring out what to do. Like Office macros, the trick to learning the ropes is understanding what the most important properties and methods do and then executing them in the proper sequence using program code.

Follow these steps to write click event procedures for the two command button objects on the UserForm: CommandButton1 and CommandButton2.

These program statements make the Image1 and Label2 objects visible on the UserForm when the user clicks the Answer button.

TIP Use the Unload statement whenever you want to close a UserForm and return to the Word macro that opened it.

Congratulations, you have built your first UserForm. Now return to Word and run the macro. Follow these steps:

NOTE If your macro didn't display the expected results, check the spelling of the statements in your event procedures, and check the property settings you made. If you forgot to set the Image1 and Label2 Visible properties to False, Visual Basic won't hide them when your macro starts.