is an If...Then decision structure that uses the conditional expression

to determine whether the macro should display the message "Welcome, Hugh!" in a message box on the screen. If the UserName property of the Application object contains a name that matches "Hugh Victor," Office displays the message box; otherwise, it skips the MsgBox statement and executes the next line in the macro. Conditional expressions always result in a True or False value, never in a maybe.

Visual Basic also supports an If...Then decision structure that allows you to include several conditional expressions. This block of statements can be several lines long and contains the important keywords ElseIf, Else, and End If.

In the next section, you'll use an If...Then decision structure to convert a selected heading style in Microsoft Word to formatted text in the Normal style. This macro is useful if you want to reduce the amount of space a Word document takes up, or if you routinely convert one heading style to another.

ON THE WEB The ConvertStyles macro is located in the Chap60 document on the Running Office 2000 Reader's Corner page.

Word's Normal template includes three default formatting styles for headings: Heading 1, Heading 2, and Heading 3. The following steps show you how to convert these styles to all caps, underline, and italic formatting:

This macro consists entirely of an If...Then decision structure that contains one If statement and three ElseIf clauses. The first If statement uses the Selection object's Type property to see whether text is selected in the document that can be evaluated by the macro. If there is a text selection, the structure determines which heading style is active, converts the head back to the Normal style, and applies some simple text formatting to preserve the meaning of the heads. (Heading 1 becomes all caps, Heading 2 is underlined, and Heading 3 is formatted as italic.)

By modifying the style and formatting constants used in this example, you could easily modify the Word macro to convert other styles or formatting options. Your screen should look like Figure 39-1. 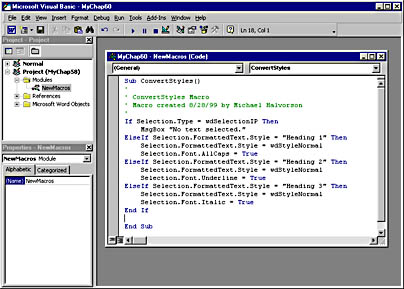 Figure 39-1. The ConvertStyles macro in the Visual Basic development environment.

To run the ConvertStyles macro to convert Word styles, follow these steps:

Place the heads on separate lines so you can test each level of formatting.

Be sure to select one head only and not multiple lines. When you run the macro, Word converts the selected head to all caps.

NOTEAt this point, we'll assume you know how to start a macro. To review the five techniques you can use to run a macro in Office, see "Running a Macro."

Using Logical Operators in Conditional Expressions
Visual Basic lets you test more than one conditional expression in your If...Then and ElseIf clauses if you want to include more than one selection criterion in your decision structure. The extra conditions are linked together by using one or more of the following logical operators:

For example, the following decision structure uses the And logical operator to test an Office object:

You'll see an example of this operator later in the chapter.