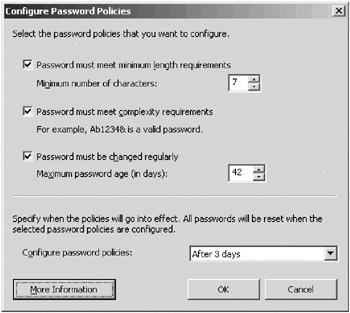 Set the minimum password length (at least seven characters). Select the second check box to require that the password be of sufficient complexity—that is, it meets three of the following four conditions:

Select the third check box to set the number of days that a password can be used before the system requires a change. The default setting is 42 days. Resist the temptation to make the number smaller. If users are required to change passwords too often, it won’t be long before passwords start appearing on sticky notes in desk drawers or attached to monitors.

At the bottom of the dialog box, you specify when these password policies go into effect. If your Windows Small Business Server is new, postpone activating strong passwords until after you configure the clients but before users log on the first time.

Among the best passwords are alphanumeric acronyms of phrases that have a meaning to the user but are not likely to be known to others. This makes the password easy for the user to remember while at the same time making it hard for an outsider to guess. For example, you could use a catch phrase such as “too good to be true” and change it into the password Twogood2bTru. Or “forever and a day” could be transformed into the password 4ever+24. It just takes a little imagination.