Despite its exemplary game design, a large component of Myth is its storytelling, which is conducted using a number of well-integrated devices. First are the cut-scenes, which appear sporadically throughout the game, outlining major plot points and setting up certain levels. These are often used more as teasers than to really advance the story significantly. Second are the mission briefings, which precede each level. These contain a large amount of detail about the progression of the war between the Light and the Dark (the game s two opposing forces). They also give meaning to the upcoming level, making the mission objective more than just some arbitrary task picked by the level designer.

Third, and most interesting, are the in-game storytelling devices that are used. Of course, the levels are set in locations that match the needs of the story line, whether it is a frostbitten, barren mountain area or a smoldering lava pit. The battles and missions contained in the level match up with the story as explained by the mission briefings. But players can also see and hear exchanges between different characters within the game. For instance, a townsperson may advise the players units of the location of a traitor. Players troops may provide advice such as, We d better get back to the bridge! Though players never lose control of their units, the game is able to trigger these bits of dialog at different key points in the levels. In one mission, as the players troops approach an insurmountable mass of Myrmidons, the Avatara that players have been guarding steps forward and says, Let me handle this. He begins a conversation with the Fetch leading the opposing forces and the story line unfolds right there in the game-world during game-time. 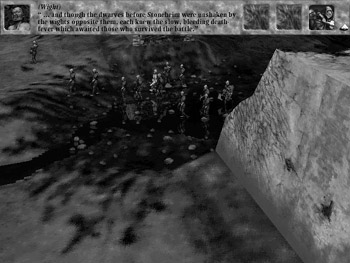 Myth tells a compelling story through a combination of mission briefings, level design, and gameplay.

In contrast to the majority of games that use storytelling as little more than an add-on to an already existing group of levels, Myth makes the story line, levels, and gameplay dependent on each other, strengthening each as a result. Players enjoy games because they enjoy the gameplay, not because the games are accompanied by long, non-interactive cut-scenes. Yet players do enjoy having stories in their games, since they can give the gameplay meaning. The best way to communicate a deep story is by making it integral to the gameplay and by revealing a little bit of it here and there during actual game-time, something Myth does expertly. Of course, the fact that Myth s story line is top- notch , the script is well written, and the voice acting is professional certainly helps. Telling a story line through gameplay will not do a game a bit of good if the plot is hackneyed , the dialog is contrived, or the voice acting is amateurish.