In this chapter, we focus on the Microsoft ISA Server firewall policy, specifically the system policy, firewall policy, and access rules. We explain how policies are processed and how you can easily export and import your policy configurations. The second half of the chapter focuses on publishing, allowing external sources to access your internal network resources securely and safely.

ISA Server inspects traffic by referring to three sets of rules in the order shown in Figure 8-1. 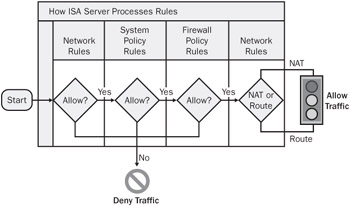