As mentioned before, RFID tags differ by their communication methods. Active tags communicate with a reader directly because they have their own transmitter that sends a signal to the environment in order to contact the reader or respond to its inquiries.

Passive and semi-passive tags, on the other hand, do not have this option. They can communicate with a reader only by using the same energy sent by the reader. These tags respond by "reflecting" some of the reader's original signal back, modified to carry the tag's data.

There are two main methods of passive communication, which differ by whether they use a magnetic field or an electric field. These methods are inductive coupling and passive backscatter (or capacitive coupling). 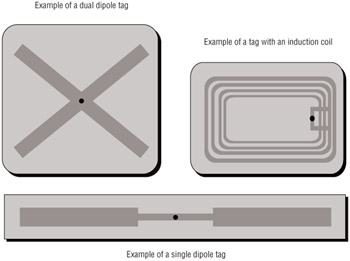 Because of the nature of the magnetic field, this communication method allows for only near-field communication and therefore short read ranges, usually less than 1 meter.

Passive backscatter communication is based on an electric field, which is out past the magnetic field. When a tag enters the electric field produced by the reader's antenna, the field creates an electric current in the tag's antenna, which powers the tag's chip. The electric field is used not only for energy transfer, but also for data transfer. The tag's antenna does not have to be a closed loop (such as an induction coil), but can be made into various shapes to achieve the best read rates possible; usually it is a dipole antenna or dual dipole. Passive backscatter is used mainly by ultra-high-frequency and microwave tags. Because of the nature of the electric field, these tags can achieve longer read ranges than tags of the same size utilizing a magnetic field.

Table 4.2 compares the attributes of inductive coupling and passive backscatter.