The Genesis3D game engine (1997) is free to use for commercial and noncommercial games and is an Open Source 3D game development engine, which means that any code modifications to the Genesis3D engine that your game makes will be freely distributed to the world. Also, the Genesis3D logo must be the first logo displayed in your game without modification.

If you want to keep your engine modification code a secret (private) and/or not display the Genesis3D logo, this engine becomes a “midsize” engine costing you $10,000 for a special Eclipse license.

The Genesis3D engine requires programmers and artists to create an entire game using the Genesis3D engine; a Windows programming language like Visual C++ 6 (or higher), Borland C++, Delphi, or Visual Basic; a 3D modeling art package like Animation: Master v8 (or higher), Milkshape3D, 3D Studio Max 3 (or higher), or Truespace; and a BSP (binary space partition) level editor like the included GEdit. DirectX 6 (or higher) is needed to run Genesis3D on Windows 95, 98, Me, and XP.

Please note that your game design and code will not be distributed—just the modifications that you make to the Genesis3D code (the engine’s DLL, LIB, or tools).

In 1999 Wild Tangent (www.wildtangent.com) and Eclipse Entertainment negotiated a deal where Wild Tangent purchased most of the Genesis3D assets to create their web driver.

Mark O’Hara began the task of cleaning up the Genesis3D code, adding new features and fixing some well-known bugs. He and his team realized they were rewriting a lot of code and decided to use their newly acquired knowledge and start from scratch, calling their endeavor Destiny3D (www.destiny3d.com/pages/engine.html).

Although Genesis3D is free, there seems to be a history of tweaking involved with using it as a viable 3D game engine. You basically get what you paid for.

In 1999 id Software released the original Quake source code under the GNU general public license. If your development team has skillful talent but little cash or a small budget and can abide by the GPL terms, then this engine should be looked at. There are no restrictions on distributing a game using the GPL Quake engine, the engine that released such games as Half-Life, Hexen, Gunman Chronicles, Laser Arena, and Quake.

If you wish to avoid the GPL terms, the “non-GPL” Quake license can be purchased for a flat fee of $10,000 per title with no royalty.

This version includes networking code (some of the best mid- to high-latency network code ever designed) and the fast code and rendering you found in Valve’s “Half-Life.” An especially great 3D game engine for budget titles (under $20 retail software).

The Torque Engine (sometimes referred to as the Tribes 2 engine) supports reflections, environment mapping, detail texturing, static or dynamic LOD (Level of Detail), skeletal animation, and animation blending. Soon it will have bump mapping and vertex and pixel shading. Facial animation and lip-synching are being discussed, but since this engine is built for action and strategy games, these features are relatively low priority.

The Torque 3D game engine from GarageGames is ideal for independent game developers with huge dreams but less cash. The Torque game engine sells for $100 per programmer (an incredibly low price considering this is the Tribes 2 engine developed by Dynamix), which includes the source code and has some of the best networking in the industry, including that of the Unreal and Quake 3 engines.

TGE has been used by several triple “A” titles and includes the latest in scripting, geometry, particle effects, animation, texturing, and award-winning multiplayer networking code.

The documents and a nice demo are provided to run in Win32 (OpenGL and DirectX) and Macintosh OS 9/X server and client with OpenGL and Linux.

What’s the reason for such an inexpensive and extremely powerful 3D engine? In 1998 Dynamix employees started GarageGames, and Sierra (Dynamix’s parent company) partnered with them for the development and licensing of the Torque Engine. After paying the minimal $100 per programmer upfront fee, the source code to the Torque Engine, a demo application, and access to the CVS server is provided. Simple games are put on the server as “free games.” Higher quality games are put in a “pay bin” where revenue is split 50-50 between GarageGames and the developer. Extremely good games are published and distributed down the retail box chain through one of GarageGames’ publisher affiliates where they receive 20 percent and the developer gets 80 percent of the royalties received. Developers can look for their own publishing deal, but GarageGames must be involved in the negotiations once they’re underway.

Unlimited products can be developed using one Torque license. Products that are placed in the pay bin are priced by the developer and bought by the educated public. Developers who contribute to the official source code and technology base can trade off back-end royalty points for the code.

The Torque Engine in its “stock state” supports up to 128 players in a single game.

As of September 2002, the licensing agreement for the Torque Game Engine (TGE) will no longer require TGE licensees to publish on the GarageGames site. GarageGames will absolutely stand by their guarantee to publish games under their current license agreement and offers current licensees the option to move to the new agreement. The new license agreement requires indies (independents) to qualify based on having current annual revenues that do not exceed $500,000 in order to license the software for the $100-per-programmer price. Specifically, the EULA will state under Grant of License: “GarageGames grants you the right to use the Software in accordance with the terms of this Agreement. If the annual revenue of your company is less than $500,000 U.S. annually, you may publicly sell, distribute, release, publish, and/or transmit any games created with the Software. You may distribute free demos of the Games through third-party distribution channels. Free games may be distributed from your own web site.”

You can get the engine for $100 per programmer, create a demo or a game, and know that you only have to pay $10,000, no royalties, for the technology once you sign your deal. Or, the other scenario is that you use the low-price engine to create your game and start your own company. The engine is nearly free as you are getting started and money is tight. Then, if you succeed, you kick the $10,000 back to GarageGames (i.e., if you are successful, they are successful). 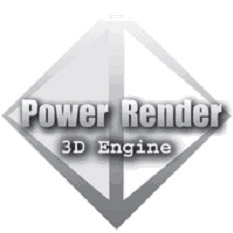 Power Render is a set of tools for creating interactive 3D applications like games. A world editor used by level designers can build entire worlds from individual elements, such as terrain, BSP objects, and characters.

It has the ability to store pixel and vertex shader code and constraints. Other features are radiosity lighting, textures each with a base map, bump map, detail map, light map, and cubic environment map, real-time shadowing, projected textures on rooms and objects, octree-based collision detection, and environmental reflections on all surfaces.

Power Render has three types of licenses where a license can be upgraded for the difference between the two prices. The shareware or freeware Power Render version is free to download (with a recommended $289 shareware price). This version includes a single-user unlimited shareware and freeware product (not for commercial products but great to demo to a publisher and upgrade after the product gets a signed contract or green flag to go retail). The tools and libraries can be used in their binary form, 12-month technical support and library updates (pay the shareware fee), and access to the FTP site for downloads and beta versions. The product must display the Power Render logo and copyright somewhere in the product.

Power Render’s commercial single-user product license (a $1,500 price tag) allows one person to develop and commercially sell his game (one game per license). The tools and library are in binary form with 12 months of technical support and library updates, access to the FTP site for downloads and beta versions. This license allows for commercial distribution royalty free for unlimited products for one person. The products must display the Power Render logo and copyright somewhere in the product.

Power Render commercial site license with source (a $5,500 price tag) allows for multiple users at multiple locations for developing a single title (per license). The tools and libraries are included as binary with full source code, technical support, and library updates available for 18 months, access to FTP site for downloading updates and beta versions. This is a royalty-free commercial distribution version for one game with modification to and distribution of tools and editor to end users for creating custom mods.

In December 2001 id released Quake 2 source code under the GNU general public license. If you have a development team that has skillful talent but little cash or a small budget and can abide by the GPL terms, then this engine should be considered. There are no restrictions on distributing a game using the GPL Quake engine, the engine that released such games as Hexen 2, Daikatana, Heretic 2, Kingpin: Life of Crime, Sin, Soldier of Fortune, and Quake 2. The Quake 2 engine has more advanced hardware and software rendering and updated network code that launched successful titles such as Soldier of Fortune and Anachronox. The tools can be licensed separately for $5,000 per project with numerous third-party tools available.

If you wish to avoid the GPL terms, the “non-GPL” Quake 2 license can be purchased for a flat fee of $10,000 per title with no royalty.