Wireless LAN (WLAN) connections represent the classic struggle between security and usability. On one hand WLANs were created and are used to simplify the ability of users to connect to and access network resources. With a wireless NIC, a user can connect to a network anywhere on a campus, in an office, or at any neighborhood coffee shop. On the other hand, WLANs are by their very nature insecure . The data is sent over the airwaves, where anyone can potentially receive it. In addition, an illegitimate user can often connect to a WLAN with the same ease that a legitimate user can if the WLAN is left in the default mode. Indeed, no one in their right mind who has any kind of security focus would allow a WLAN in their environment. However, it is not a lost cause. As you will see, there are many things you can do to secure your WLANs.

At the same time, you may already have a WLAN or are planning one. Does this mean you aren t concerned with security? Of course not. To the contrary, this illustrates how important it is to provide usability and functionality to your users. It also illustrates the simple reality that in the struggle between what users want and need and security, security frequently comes in second. This does not mean that we have to accept that we cannot secure our WLANs, though. Instead, it means that we need to take extra measures to ensure that we provide the access our users request while providing the security our network requires.

As mentioned in Chapter 1, wireless presents a unique problem to your networks. It is entirely too easy for someone to obtain a rogue WAP, connect it to your network (using DHCP to assign the WAP an IP address), and then allow anyone with a wireless client to be able to connect to your network, even though your wireless security policy should explicitly prohibit such actions.

WLAN Modes of Operation and Components

You also need to explicitly define the physical WLAN components you will allow in your network. This will assist you in detecting and identifying unauthorized wireless devices. The three primary WLAN components to define in your environment are the following:

I personally know of companies that have rogue WAPs that allow anyone on the freeway to access their internal production network, including potentially granting access to source code. A rogue WAP is a death blow to security because no matter how much you have hardened the perimeter, it has been instantly undermined by the WAP once it connects to your internal network.

Just because we can t really prevent unauthorized WAPs from being implemented on the network doesn t mean we can t detect and remove them. It just means that we need to get a little creative in how we approach the problem. 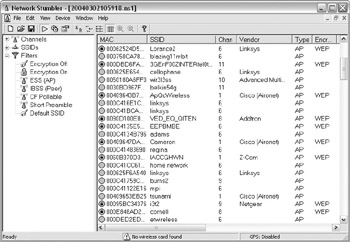 The most effective method of detecting unauthorized WAPs is by simply using a wireless client and locating the WAPs broadcasting in your environment. A few caveats must be considered when employing this method, however:

The good news is that because most unauthorized WAPs are not implemented by malicious users (and oftentimes are implemented by nontechnical users), the odds are high that the SSID broadcast has not been disabled. This leaves us with the problems of needing to be within range of the WAP to detect it and trying to survey remote sites. It is often impractical for someone in IT to spend the day walking around trying to determine if they can detect access points. One of the best solutions I have seen for this is to take advantage of someone who on a daily basis must walk around the environment ”the mail delivery person. You can outfit this person with a laptop or handheld carrying extra batteries and while they make their normal rounds delivering the mail, the laptop can sit in the bottom of the mail cart quietly detecting any WAPs. A number of wireless analyzers can be used to detect the presence of unauthorized WAPs, including the following:

Netstumbler provides one of the easiest methods for detecting a rogue AP over the wireless network. Once you install Netstumbler, the program automatically begins scanning for WAPs with no configuration required on your part (other than providing the wireless NIC, of course). For example, the screen shown next depicts what I was able to capture while driving down a major freeway in the Houston area. I captured 175 WAPs, of which 113 were running no encryption whatsoever, and none of which were running WiFi Protected Access (WPA). Instead, they were all using WEP.

Detecting unauthorized WAPs from the wired network is generally not as easy a process as it is to detect them wirelessly. After all, it doesn t get much simpler than walking around with a laptop and a wireless card. At the same time, you can t really do much about the biggest problem with trying to detect a WAP wirelessly ”namely ”detecting a WAP that is not broadcasting its SSID.

Unfortunately, there are some drawbacks to this method. It can be difficult to locate all the unauthorized access points. This is largely due to the lack of mature or specialized products for this task. Currently, most techniques rely on using MAC addresses (because all vendors are assigned a MAC address range) or OS fingerprinting to identify the WAP, both of which are an imprecise science. Here are two tools that can assist you in identifying an unauthorized AP by monitoring MAC addresses:

Here are some tools that can assist you in OS fingerprinting:

Both of these methods share the common problem of generating false positives. For example, Nmap recognizes a Linksys WAP54G as a Linux device because it actually runs Linux for the OS. This can make it difficult to determine whether the device is indeed a WAP or just a Linux host running on your network. MAC address tools rely on identifying a device due to it having a MAC address that has been assigned to a wireless vendor. That can make it difficult to distinguish between a Cisco AP and a Cisco switch if the database of MAC addresses has not been accurately updated.

Detecting WAPs from the Wired Network

While I was writing this, I got into a discussion with a colleague about the inconsistencies and difficulties of detecting a rogue wireless AP on the network. He mentioned that he was testing an alpha version of Network Associates ePolicy Orchestrator (EPO; http://www.nai.com/us/products/ mcafee /mgmt_solutions/epo.htm ) that has the ability to detect rogue wireless APs. When I asked him how well it worked, he mentioned that he had tested EPO with a number of different wireless APs and that it detected all of them within 5 “8 minutes of being brought online. The technology is definitely improving, and the accuracy of the detection algorithms is getting much better.

Once you have detected a rogue WAP, you have a couple of methods you can use to shut it down. One option is to attempt to physically locate and disconnect the WAP from the network. However, this can be both time consuming and prone to failure. The obvious difficulty in this method is that it can be very difficult to locate the WAP, usually through a trial-and-error process. (Is the WAP here? No. Is it here? No.)

Another option is to locate the switch port that the MAC address is connected to and shut that switch port down. Similarly, you can determine the IP address of the WAP and attempt to block the IP address. Personally, I recommend shutting down the switch port. In many cases, this will cause the person to seek you out, saving you the time and effort of trying to find them.

User: Uh, yes, I can t access anything on the network anymore. I don t know what happened .

You: No problem. We know exactly what is going on. What office are you in?