How This Looks on the Xbox 360

Ok, the game is now finished and you tested it quite a bit on the Windows platform. As I already explained in the first chapter there are several steps required to get the Xbox 360 up and running for the XNA Framework. If the XNA Game Launcher is started on the Xbox 360 you can try to compile your XNA Pong game and deploy it to the console.

There are a few important things to remember for the Xbox 360:

XNA Pong was always coded with the Xbox 360 in mind; all methods and features you used are supported on the Xbox 360. Therefore testing the game on the Xbox 360 is no big deal, you can just deploy it and start it and it will work fine (see Figure 2-11). 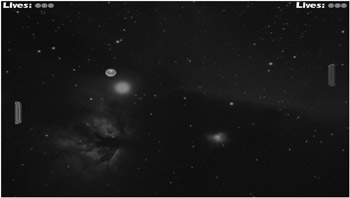