Recursion is a deceptively simple concept: Any routine that calls itself is recursive. Despite this apparent simplicity, understanding and applying recursion can be surprisingly complex. One of the major barriers to understanding recursion is that general descriptions tend to become highly theoretical, abstract, and mathematical. Although there is certainly value in that approach, this chapter will instead follow a more pragmatic course, focusing on example, application, and comparison of recursive and iterative (nonrecursive) algorithms.

Recursion is most useful for tasks that can be defined in terms of similar subtasks. For example, sort, search, and traversal problems often have simple recursive solutions. A recursive routine performs a task in part by calling itself to perform the subtasks. At some point, the routine encounters a subtask that it can perform without calling itself. This case, in which the routine does not recurse, is called the base case; the former, in which the routine calls itself to perform a subtask, is referred to as the recursive case.

These concepts can be illustrated with a simple and commonly used example: the factorial operator. n! (pronounced “n factorial”) is essentially the product of all integers between n and 1. For example, 4! = 4 _ 3 _ 2 _ 1 = 24. n! can be more formally defined as follows:

Figure 7-1 illustrates the operation of this routine when computing 4!. Notice that n decreases by 1 each time the routine recurses. This ensures that the base case will eventually be reached. If a routine is written incorrectly such that it does not always reach a base case, it will recurse infinitely. In practice, there is usually no such thing as infinite recursion: Eventually a stack overflow occurs and the program crashes - a similarly catastrophic event. (There is a form of recursion, called tail recursion, that can be optimized by the compiler to use the same stack frame for each recursive call. An appropriately optimized tail recursive algorithm could recurse infinitely because it wouldn’t overflow the stack.) 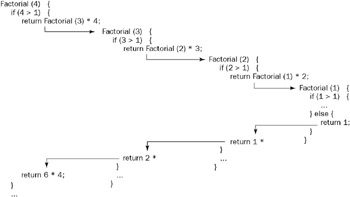 For example, if you need a factorial routine that returns all of its intermediate results (factorials less than n), as well as the final result (n!), you most naturally return these results as an integer array, which means the routine needs to allocate an array. You also need to know where in the array each result should be written. These tasks are most easily accomplished using a wrapper routine, as follows:

You can see that using a wrapper routine enables you to hide the array allocation and recursion level tracking to keep the recursive routine very clean. In this case, it’s possible to determine the appropriate array index from n, avoiding the need for the level argument, but in many cases there is no alternative to tracking the recursion level as shown here.

Although recursion is a very powerful technique, it is not always the best approach, and rarely is it the most efficient approach. This is due to the relatively large overhead for routine calls on most platforms. For a simple recursive routine like factorial, many computer architectures spend more time on call overhead than the actual calculation. Iterative routines, which use looping constructs instead of recursive routine calls, do not suffer from this overhead and are frequently more efficient.

Any problem that can be solved recursively can also be solved iteratively. Iterative algorithms are often quite easy to write, even for tasks that might appear to be fundamentally recursive. For example, an iterative implementation of factorial is relatively simple. It may be helpful to expand the definition of factorial, such that you describe n! as the product of every integer between n and 1, inclusive. You can use a for loop to iterate through these values and calculate the product:

The Google Resume: How to Prepare for a Career and Land a Job at Apple, Microsoft, Google, or any Top Tech Company