The JMS API allows applications to create, send, receive, and read messages. Messages can arrive asynchronously, meaning the client does not have to specifically request messages in order to receive them. In addition, the programmer can specify different levels of reliability, depending on the type of message transmitted. Unlike traditional low-level network remote procedure call mechanisms, JMS is loosely coupled, meaning that the sending and receiving applications do not both have to be available at the same time to enable communication (Sun Microsystems, 2002). In other words, the sender and receiver need not know anything about each other when communicating. This is particularly useful in the wireless domain because of the "sometimes on" characteristics of wireless devices.

The following components are present in a JMS implementation:

The JMS programming model can be summarized in Figure 4. 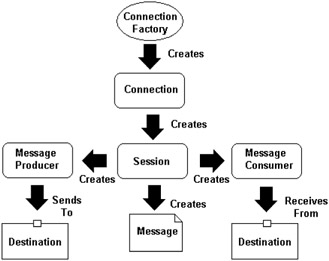 JMS tackles several of the issues inherent in message-oriented middleware in the wireless domain. These include the following:

For a message to be considered as having been consumed successfully, it has to be acknowledged by the receiving party. However, for performance reasons, it may be inconvenient to acknowledge every message that is received. JMS provides different levels of acknowledgment. When the AUTO_ACKNOWLEDGE value of a particular session is set, all messages belonging to the session are acknowledged. The CLIENT_ACKNOWLEDGE value specifies that messages will be acknowledged on the session level. This means that acknowledging receipt of a message during a session automatically acknowledges receipt of all other messages during that session. The DUPS_OK_ACKNOWLEDGE value allows lazy acknowledgment of messages and is likely to result in duplicate messages being delivered. This value should be set when the client wishes to reduce session overhead but can tolerate duplicate messages arriving (Sun Microsystems, 2002).

JMS sessions can be transactional. The first argument to the createSession method specifies whether the session is transacted or not. With transacted sessions, if one operation fails, all changes made during that session are rolled back to a previous committed state. Thus, the operations in the session are seen as an autonomic unit of work (Sun Microsystems, 2002).