To evaluate the performance of the implemented system, some simple experiments were conducted to see if the agents are able to track the user's preference. The computer used in this experiment is a Pentium 4 operating under the Windows ME environment with JDK1.3.0. The system connects to the Internet via a 56.6 kbps modem.

In this experiment, a group of 20 product-brokering agents are instructed to search for CPU on the Internet. Assume that the user aims to get the most powerful CPU and does not care about the price. After instructing the agents to search for the product, the system is allowed to run on its own for about 10 minutes so that the agents can retrieve sufficient products before the user gives feedback. After 10 minutes, the user clicks on the result button, and the recommended list is as shown in Figure 6. 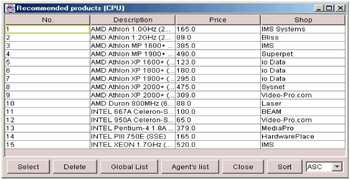 From the recommended list, the user selects the current best product at row 13, which happens to be a Pentium 4, 1.8 GHz, as shown in Figure 7. 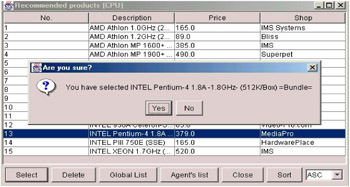 While the feedback is being made, the system continues to search for products in the background. After making a few similar selections, the agents evolved and reevaluated their list. The new recommended list is now as shown in Figure 8. The list now only shows the best CPU retrieved by all the agents.

When the user is satisfied with what the system learned, the user allows the system to continue searching the Internet for new products on its own. After some time has passed, the agents found an even better-performing CPU, and this is reflected in the agent's recommended list, as shown in Figure 9.

An initial population of 20 agents is created, and the response of the system is observed by changing the number of agents to evolve in the population. 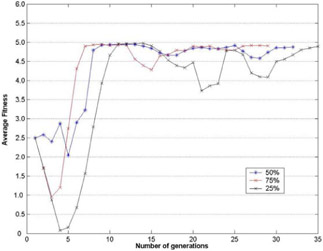 The results obtained from this experiment showed that the system is capable of tracking gradual changes in the user's preferences. Although some "dips" are observed during the experiment, the average fitness of the agents in the system remains high while the user changes his or her selection. These dips could happen because some of the agents might not have the products that the user selected in their databases. Therefore, these agents do not receive any points and could significantly "pull down" the average fitness.

The proposed design of a product-brokering agent was implemented, using Java on a desktop computer. However, mobile devices such as phones and PDAs tend to have smaller screens, slower processors, and limited memory. Hence, this will pose some serious constraints when we want to transfer the software into these mobile devices. There is also a serious lack of standardization, as these mobile devices use different OS platforms, which makes it difficult for the developer to create a single program that can run on all devices.

After taking these issues into consideration, a possible solution is to use software that is compatible across multiple operating platforms. A good candidate is Java, which has been used to implement the system as mentioned in this chapter. However, the disadvantage of Java as compared to other programming languages, such as C, is its less efficient and slower program execution. Faster processors and more memory are needed to compensate for this. This results in higher cost, and, for wireless applications, shorter battery life. However, this disadvantage has been slowly reduced by the introduction of more efficient JIT (just-in-time) compilers. Recently, the developers of Java also introduced some highly optimized and micro versions of the Java software to cater especially to small devices, such as cellular phones and PDAs.

Application of Product-Brokering Agent in M-Commerce

A PDA is an ideal device for m-commerce applications. It tends to have a larger screen and a more powerful processor as compared to a cellular phone but is less bulky than a laptop. Making an existing application viewable in any wireless device, a process known as transcoding, is among one of the biggest challenges of m-commerce. In order to fit the screen of the PDA, the GUI implemented in this chapter will have to be scaled down to the appropriate size. A possible solution to fit all these into the PDA screen is to use scrollbars that allow the user to scroll the GUI. A possible screenshot of a PDA with the GUI is as shown in Figure 11. 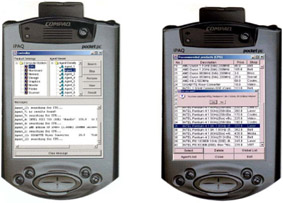 Figure 11: Screenshot of a PDA with the Implemented GUI

The PDA selected for our application is the Compaq iPAQ Pocket PC H3870. It has one of the largest viewable screens on the market and also has an integrated Bluetooth for wireless links to Bluetooth-enabled cellular phones. This device also supports the Java Virtual Machine, which will allow our software to be integrated easily into the PDA. The specifications of the PDA are as shown in Table 1.