The class methods: tellg() and tellp() return these locator values. The construct of these methods are:

These methods can be used for getting and putting data respectively. The streamposition is the byte location of the respective position locator.

It is possible to move these file position locators using the methods: seekg() and seekp(). The output of these methods is based upon the data type: off_type which is an integer type defined by ios and the enumeration type: seekdir with the following enumerators:

The constructs of these methods are:

for moving the get and put file position locators respectively. The value offset is the distance in bytes the respective file locators will be moved from the value of location.

These two methods may be used as in the following examples: 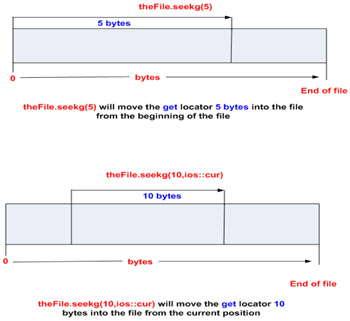 If the program was manipulating these locators for an object of class RealStuff, then the offset could be found as in the following:

Where offset would provide the byte location from ios::beg to where the object is to be the recordNumber object within the file.

It is then possible to read from or to write to a particular record. For example to read the 7th record, code similar to the following could be written:

and the following could be used to write to the 19th record of the binary file:

Using these files with the constructors and the methods: open() and close(), it is possible to manage random access of binary files.

Using the following program: salsomny.cpp, run it on a week's amount of data. After you have done that, run the program: salsimnycount.cpp. Now run the two programs one more time and notice the differences.