Each of these formats is best suited for certain environments, as you'll see in the following sections.

CDFS, or CD-ROM File System, is a relatively simple format that was defined in 1988 as the read-only formatting standard for CD-ROM media. Windows 2000 implements ISO 9660-compliant CDFS in \Winnt\System32\Drivers\Cdfs.sys, with long filename support defined by Level 2 of the ISO 9660 standard. Because of its simplicity, the CDFS format has a number of restrictions:

CDFS is considered a legacy format because the industry has adopted the Universal Disk Format (UDF) as the standard for read-only media.

The Windows 2000 UDF file system implementation is ISO 13346-compliant and supports UDF versions 1.02 and 1.5. OSTA (Optical Storage Technology Association) defined UDF in 1995 as a format to replace CDFS for magneto-optical storage media, mainly DVD-ROM. UDF is included in the DVD specification and is more flexible than CDFS. UDF file systems have the following traits:

Although the UDF format was designed with rewritable media in mind, the Windows 2000 UDF driver (\Winnt\System32\Drivers\Udfs.sys) provides read-only support.

Windows 2000 supports the FAT file system primarily to enable upgrades from other versions of Windows, for compatibility with other operating systems in multiboot systems, and as a floppy disk format. The Windows 2000 FAT file system driver is implemented in \Winnt\System32\Drivers\Fastfat.sys.

Each FAT format includes a number that indicates the number of bits the format uses to identify clusters on a disk. FAT12's 12-bit cluster identifier limits a partition to storing a maximum of 212 (4096) clusters. Windows 2000 uses cluster sizes from 512 bytes to 8 KB in size, which limits a FAT12 volume size to 32 MB. Therefore, Windows 2000 uses FAT12 as the format for all 5¼-inch floppy disks and 3.5-inch floppy disks, which store up to 1.44 MB of data.

A FAT volume is divided into several regions, which are shown in Figure 12-2. The file allocation table, which gives the FAT file system format its name, has one entry for each cluster on a volume. Because the file allocation table is critical to the successful interpretation of a volume's contents, the FAT format maintains two copies of the table so that if a file system driver or consistency-checking program (such as Chkdsk) can't access one (because of a bad disk sector, for example) it can read from the other.

Entries in the file allocation table define file-allocation chains (shown in Figure 12-3) for files and directories, where the links in the chain are indexes to the next cluster of a file's data. A file's directory entry stores the starting cluster of the file. The last entry of the file's allocation chain is the reserved value of 0xFFFF for FAT16 and 0xFFF for FAT12. The FAT entries for unused clusters have a value of 0. You can see in Figure 12-3 that FILE1 is assigned clusters 2, 3, and 4; FILE2 is fragmented and uses clusters 5, 6, and 8; and FILE3 uses only cluster 7.

The root directory of FAT12 and FAT16 volumes are preassigned enough space at the start of a volume to store 256 directory entries, which places an upper limit on the number of files and directories that can be stored in the root directory. (There's no preassigned space or size limit on FAT32 root directories.) A FAT directory entry is 32 bytes and stores a file's name, size, starting cluster, and time stamp (last-accessed, created, and so on) information. If a file has a name that is Unicode or that doesn't follow the MS-DOS 8.3 naming convention, additional directory entries are allocated to store the long filename. The supplementary entries precede the file's main entry. Figure 12-4 shows an example directory entry for a file named "The quick brown fox." The system has created a THEQUI~1.FOX 8.3 representation of the name (you don't see a ."" in the directory entry because it is assumed to come after the eighth character) and used two more directory entries to store the Unicode long filename. Each row in the figure is made up of 16 bytes. 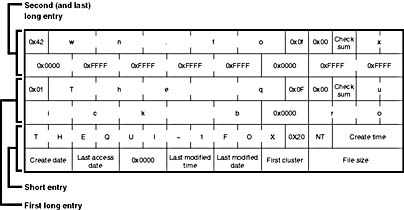 FAT32 is the most recently defined FAT-based file system format, and it's included with Windows 95 OSR2, Windows 98, and Windows Millennium Edition. FAT32 uses 32-bit cluster identifiers but reserves the high 4 bits, so in effect it has 28-bit cluster identifiers. Because FAT32 cluster sizes can be as large as 32 KB, FAT32 has a theoretical ability to address 8-terabyte (TB) volumes. Although Windows 2000 works with existing FAT32 volumes of larger sizes (created in other operating systems), it limits new FAT32 volumes to a maximum of 32 GB. FAT32's higher potential cluster numbers let it more efficiently manage disks than FAT16; it can handle up to 128-MB volumes with 512-byte clusters. Table 12-2 shows default cluster sizes for FAT32 volumes.

Besides the higher limit on cluster numbers, other advantages FAT32 has over FAT12 and FAT16 include the fact that the FAT32 root directory isn't stored at a predefined location on the volume, the root directory doesn't have an upper limit on its size, and FAT32 stores a second copy of the boot sector for reliability. A limitation FAT32 shares with FAT16 is that the maximum file size is 4 GB, because directories store file sizes as 32-bit values.

As we said at the beginning of the chapter, the NTFS file system is the native file system format of Windows 2000. NTFS uses 64-bit cluster indexes. This capacity gives NTFS the ability to address volumes of up to 16 exabytes (16 billion GB); however, Windows 2000 limits the size of an NTFS volume to that addressable with 32-bit clusters, which is 128 TB (using 64-KB clusters). Table 12-3 shows the default cluster sizes for NTFS volumes. (You can override the default when you format an NTFS volume.)

NTFS includes a number of advanced features, such as file and directory security, disk quotas, file compression, directory-based symbolic links, and encryption. One of its most significant features is recoverability. If a system is halted unexpectedly, the metadata of a FAT volume can be left in an inconsistent state, leading to the corruption of large amounts of file and directory data. NTFS logs changes to metadata in a transactional manner so that file system structures can be repaired to a consistent state with no loss of file or directory structure information. (File data can be lost, however.)