NOTE For a number of reasons, including the fact that laptops usually have only one disk, and laptop disks typically don't move easily between computers, Windows 2000 uses only basic disks on laptops. In addition, only fixed disks can be dynamic, and disks located on IEEE 1394 or USB buses as well as on shared cluster server disks are always basic disks.

The standard BIOS implementations that x86 hardware uses dictate one requirement of the partitioning format in Windows 2000—that the first sector of the primary disk contains the master boot record (MBR). When an x86 processor boots, the computer's BIOS reads the MBR and treats part of the MBR's contents as executable code. The BIOS invokes the MBR code to initiate an operating system boot process after the BIOS performs preliminary configuration of the computer's hardware. In Microsoft operating systems, including Windows 2000, the MBR also contains a partition table. A partition table consists of four entries that define the locations of as many as four primary partitions on a disk. The partition table also records a partition's type. Numerous predefined partition types exist, and a partition's type specifies which file system the partition includes. For example, partition types exist for FAT32 and NTFS. A special partition type, an extended partition, contains another MBR with its own partition table. By using extended partitions, Microsoft's operating systems overcome the apparent limit of four partitions per disk. In general, the recursion that extended partitions permit can continue indefinitely, which means that no upper limit exists to the number of possible partitions on a disk. Figure 4-1 shows an example disk-partitioning scenario. The boot process is the first instance in which Windows 2000 makes evident the distinction between primary and extended partitions. The system must mark one primary partition of the primary disk as active. The Windows 2000 code in the MBR loads the code stored in the first sector of the active partition (the system volume) into memory and then transfers control to that code. Because of the role in the boot process played by this first sector in the primary partition, Windows 2000 designates the first sector of any partition as the boot sector. Recall from Chapter 4 that every partition formatted with a file system has a boot sector that stores information about the structure of the file system on that partition.

As we've stated, dynamic disks are the favored disk format in Windows 2000 and are necessary for creating new multipartition volumes. The Logical Disk Manager (LDM) subsystem in Windows 2000, which consists of user-mode and device driver components, oversees dynamic disks. Microsoft licenses LDM from VERITAS Software, which originally developed LDM technology for UNIX systems. Working closely with Microsoft, VERITAS ported its LDM to Windows 2000 to provide the operating system with more robust partitioning and multipartition volume capabilities. A major difference between LDM's partitioning and MS-DOS-style partitioning is that LDM maintains one unified database that stores partitioning information for all the dynamic disks on a system—including multipartition-volume configuration. LDM's UNIX version incorporates disk groups, in which all the dynamic disks that the system assigns to a disk group share a common database. VERITAS's commercial volume-management software for Windows 2000 also includes disk groups, but the Windows 2000 LDM implementation includes only one disk group.

Another reason LDM creates an MS-DOS-style partition table is so that the Windows 2000 boot code can find the system and boot volumes, even if the volumes are on dynamic disks. (Ntldr, for example, knows nothing about LDM partitioning.) If a disk contains the system or boot volumes, hard partitions in the MS-DOS partition table describe the location of those volumes. Otherwise, one hard partition begins at the first cylinder of the disk (typically 63 sectors into the disk) and extends to the beginning of the LDM database. LDM marks this partition as type "LDM," an MS-DOS-style partition type new to Windows 2000. The region encompassed by this place-holding MS-DOS-style partition is where LDM creates soft partitions that the LDM database organizes. Figure 10-1 illustrates this dynamic disk layout.

A database entry can be one of four types: partition, disk, component, and volume. LDM uses the database entry types to identify three levels that describe volumes. LDM connects entries with internal object identifiers. At the lowest level, partition entries describe soft partitions, which are contiguous regions on a disk; identifiers stored in a partition entry link the entry to a component and disk entry. A disk entry represents a dynamic disk that is part of the disk group and includes the disk's GUID. A component entry serves as a connector between one or more partition entries and the volume entry each partition is associated with. A volume entry stores the GUID of the volume, the volume's total size and state, and a drive-letter hint. Disk entries that are larger than a database record span multiple records; partition, component, and volume entries rarely span multiple records.

LDM requires three entries to describe a simple volume: a partition, component, and volume entry. The following listing shows the contents of a simple LDM database that defines one 200-MB volume that consists of one partition.

The final area of the LDM database is the transactional log area, which consists of a few sectors for storing backup database information as the information is modified. This setup safeguards the database in case of a crash or power failure because LDM can use the log to return the database to a consistent state.

The Windows 2000 resource kits include a tool named DmDiag that you can use to view detailed information about a system's physical disks, the contents of the LDM database, and the partitioning layout of MS-DOS-style partition tables. In addition to this disk-related data, DmDiag also dumps the mount points defined for a system (mount points are described later in this chapter) and the device objects and symbolic links present in the object manager namespace.

DmDiag takes no command-line options, and its output is usually more than a few screens in size, so you should pipe its output to a file for viewing in a text editor, for example, like this: dmdiag > disk.txt. The following figure shows excerpts of DmDiag output. A description of the types of disks present on the system is followed by the listing of the LDM database records that describe a 1-GB simple volume. The volume's database entry is listed as Volume1. 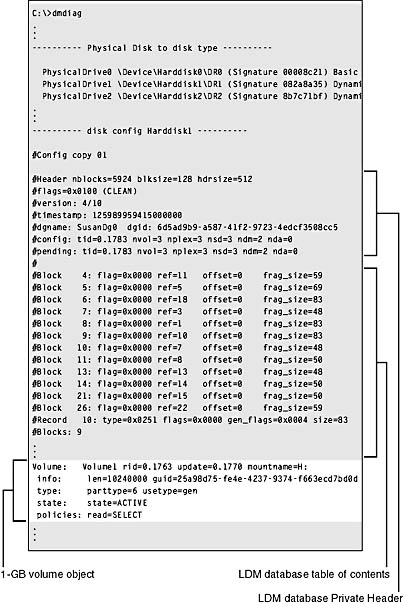 As part of an initiative to provide a standardized and extensible firmware platform for operating systems to use during their boot process, Intel has designed the Extensible Firmware Interface (EFI) specification. EFI includes a mini-operating system environment implemented in firmware (typically ROM) that operating systems use early in the system boot process to load system diagnostics and their boot code. One of the first targets of EFI is IA-64, so the 64-bit version of Windows 2000 will use EFI. You can find a complete description of EFI at developer.intel.com/technology/efi.

EFI defines a new partitioning scheme, called the GUID Partition Table (GPT), that addresses some of the shortcomings of MS-DOS-style partitioning. For example, the sector addresses that the GPT partition structures use are 64 bits wide instead of 32 bits. A 32-bit sector address is sufficient to access only 2 terabytes (TB) of storage. You don't see storage devices with that capacity today, but the GPT standard is designed with the future in mind. Other advantages of the GPT scheme include the fact that it uses cyclic redundancy checksums (CRC) to ensure the integrity of the partition table, and it maintains a backup copy of the partition table. GPT takes its name from the fact that in addition to storing a 36-byte Unicode partition name for each partition, it assigns each partition a GUID.

The following figure shows an example GPT partition layout. Like basic and dynamic disks in Windows 2000, the first sector of a GPT disk is an MBR. However, the second and last sectors of the disk store the GPT partition tables. With its extensible list of partitions, GPT partitioning doesn't require nested partitions, as MS-DOS-style partitions do. 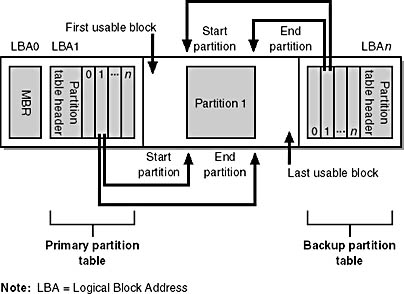