You will probably remember from the previous chapter that a QueryDef is the name given to a query object variable in VBA. Just as we can create a String -type variable to hold a piece of text, so we can create a QueryDef object to hold a query definition. Note that a QueryDef object holds the definition of a query, not the results. Query results, as we saw in the previous chapter, are held in Recordset objects. If you want, you can think of the QueryDef as being like a query in design view and a Recordset as representing a query in datasheet view. 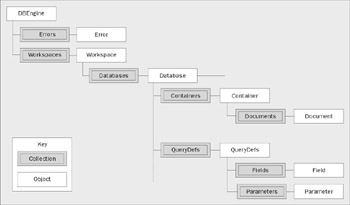 As you can see from the diagram above which shows a section of the DAO hierarchy, the QueryDefs collection belongs to the Database object. This is fairly logical really - after all, a database can have multiple queries in it, but a query can only exist in one database.

Creating a QueryDef is very simple.

First, we create an empty QueryDef object. The CreateQueryDef method both creates a QueryDef object and assigns it the name that it will have when it is saved. If you don't intend to save it and will only use it in the current procedure, you can give it an empty string ( "" ) as its name and it won't be saved. However, we do want to save our QueryDef so we can use it again later and so we'll call it qryExample .

Next, we assign the SQL property of the QueryDef object. If you aren't too sure about how to write SQL, you can always try designing the query normally in the Query Designer and then switching the query to SQL view to see the SQL created. You can then copy the SQL to the clipboard and paste it into your procedure from there.

Finally, we close the QueryDef , with the following line:

The act of closing the QueryDef saves it to the database. Then we refresh the database window to show the changes:

The RefreshDatabaseWindow method causes any changes to database objects such as forms, reports , and queries to be immediately reflected in the database window.

Modifying the QueryDef is just as simple as creating it. First you use a variable to reference the QueryDef called qryExample in the current database.

And then you modify its SQL property, save it, and refresh the database window like we did in the previous function.

If the frmCriteria form is to be used to allow users to frame their queries in a manner of their own choosing, we will then need to convert the entries that the user makes on the form into an SQL statement and use that SQL statement to select the records that should be displayed.

The SELECT clause indicates the columns or fields that will be displayed in the result set of the query.

The FROM clause indicates the base table or tables from which the results are drawn. The AS keyword is optional but if used gives the alias name to the table or tables specified. For example SELECT tblSales AS s means that you can use s instead of the longer tblSales throughout the rest of the query. Using aliases can save a lot of typing and if used carefully can make queries much easier to read and, therefore, to maintain. It is also possible to abbreviate this clause by omitting the AS keyword but retaining the alias name, for example: SELECT tblSales s

The WHERE clause indicates the criteria for determining which rows or records will be represented in the result set of the query.

Put another way, if you think of the table as a kind of spreadsheet, the SELECT clause is a form of vertical partitioning, and the WHERE clause a method of horizontal partitioning: 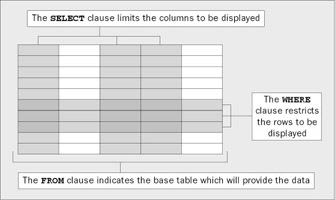 So let's see how this works when we apply it to the frmCriteria form in the Ice Cream database.

Well, we know which fields we want displayed. We know that the user is to be shown details of each sale and so we will have to display all of the fields from the tblSales table. That will be fixed and won't change, irrespective of the criteria we select on frmCriteria . In other words, the SELECT clause will not change and will always be:

which selects all of the fields from the tblSales table.

Things get slightly more complicated with the FROM clause. Most of the time we will only need to use the tblSales table. This is because most of the criteria on the frmCriteria form represent columns in the tblSales table. In fact, if we look at the following table, we can see which columns are represented by which criteria on the frmCriteria form.

As you can see, however, one of these criteria is dependent on a field in a separate table. If we want to view sales of ice creams that contain specific ingredients , then we need to join the tblSales table with the tblIceCreamIngredient table and then search for records with an fkIngredientID matching the one selected on the criteria form.

So, we can see that most of the time our FROM clause will look like this:

The only variation is when the user chooses to restrict by ingredient, when the FROM clause will look like this:

This FROM clause implements the join between the two tables. The two tables to be joined are tblSales and tblIceCreamIgredients :

And the fields participating on either side of the join are both called fkIceCreamID :

Now for the WHERE clause, this one is certainly going to change. What we are interested in is building up a SQL statement which will restrict the rows selected to those which meet our criteria and as we know, it is the WHERE clause which restricts the rows that are returned. Each of the criteria selected by the user will add at least one extra element to the WHERE clause. So, in the specific example we have been looking at so far, the following WHERE clause would be generated.

Anyway, enough of the theory; let's get on with writing a procedure which converts our criteria into a SQL string.

Try It Out-Building a SQL String

The principle behind this procedure is simple enough, although it may look a bit daunting at first! The general idea is that a variable of type String , strSQL , is passed into the procedure by reference. We do this rather than passing the variable by value as we would normally do so that the function can modify it. Note that we can't simply return the string using the function's return value as we are already using this to indicate success or failure of the operation. The procedure eventually puts into that variable a SQL statement that reflects the choices entered by the user on frmCriteria .

In fact, there is nothing in this exercise that we have not already covered in this chapter. The first step was to create a procedure that generates an SQL string from the criteria that were selected. The heart of this procedure is three variables that correspond to the three parts of the SQL string.

As we said earlier, the SELECT clause is invariant, so we can populate that immediately.

The next step is to complete the FROM clause. Again, we looked at this earlier and decided that it should contain just the tblSales table unless the user chose to restrict by ingredient, in which case the tblIceCreamIngredient table should be joined to it. We also alias tblsales to s and tblIceCreamIngredient to i . This simply helps to make the rest of the string shorter and easier to read.

You can use the "+" (addition) operator instead of the " & " (concatenation) operator to build strings with instead but the " & " operator is able to perform automatic type casting and so is preferable. For example, if you had a string called strTestString and an integer called intTestInt then the equivalent of " strTestString & intTestInt " is " strTestString + Str(intTestInt) " - if you don't explicitly cast the integer variable by using the Str() function then you get a "Type Mismatch" error.

Next we construct the WHERE clause. To build the WHERE clause, we look at each of the textboxes in frmCriteria in turn . If the user has checked the checkbox for a criterion and has entered something in the relevant textbox, we add that criterion to the WHERE clause, after first checking to see if we need to add an and or not as whenever we add a new section to the end of the WHERE clause we must also add an AND in front of it to link the sections together.

Remember that the variable that is being populated with the SQL string is the one that was passed into the function at the start.

This variable was passed in by reference which means that we can amend the contents of the variable and those changes will persist when the function exits.

All that is left in this procedure is to return True to indicate that the procedure completed successfully. Strictly speaking this is unnecessary as we don't actually perform any validation checks on the string we build. We could have just used a subroutine rather than a function, that is, we don't strictly need to return a value here and so we don't need to use a function. However, it is standard practice to use a function that returns a Boolean value to indicate success or failure, and if at a later date we decide to modify the function to include checking code then we will not need to change any code that calls the function.

Having built the function, we then need to make sure that it is invoked when the user presses the Find Matches button on the criteria form. So we modify the cmdFind_Click procedure by declaring a variable to hold the SQL string and then passing it into the BuildSQLString procedure.

Note how we check the return value of the BuildSQLString procedure and display an error message if it's False . If it is True , however, we display the string in a message box and then modify the qryExample query to contain the SQL string that we built.

That is fine as far as it goes and we are well on the way to achieving the functionality that we originally stated. If you remember, we stated earlier that when they run the query, the users want to know how many sales match the criteria that they have specified and should then be presented with the opportunity of viewing:

Well, so far we have a way of determining the criteria that the user wants to use to restrict the sales records that he or she wants to view, and we have a method of programmatically modifying a query in Access to express the user's choice. So, where do we go from here?