Let’s imagine that I need to send a thank-you letter to my friend Rusty for giving me tickets to a football game last week. Let’s also assume that I will send the letter to Rusty’s office. In real life, it’s probably easier and cheaper to send an e-mail message to Rusty, but that makes for a more complicated example, and sometimes a written letter is simply more appropriate. What sort of steps would I follow to send Rusty the thank-you letter?

As we all know, the order of these steps is open to several variations, but at some point before I send the letter, I have to write the letter. As I am writing the letter, I’ll probably want to reference the football game, as it would be unusual to send a thank-you letter expressing thanks for nothing in particular. Next I would put the letter in an envelope. Then I would write the delivery address on the envelope and place the necessary postage on the envelope. The last step is to drop the letter in any mailbox and let the postal service deliver the letter to Rusty. I am assuming that Rusty will know the letter is from me and that he will know that I appreciated the football tickets.

When we describe messaging participants, it’s often helpful to label them according to the role they play in the message delivery. In general, there are three types of messaging participants: the initial sender, the ultimate receiver, and the intermediaries. In our thank-you letter scenario, I am the initial sender, Rusty is the ultimate receiver, and the mail system and Rusty’s office staff are intermediaries.

Let’s imagine a more real-world business scenario-the order processing system at Contoso Boomerang Corporation. Basically, customers place boomerang orders on the Web site, and the Web site generates an order message and sends it to other internal systems for processing and fulfillment, as shown in Figure 2-1.

Several facts are implied in this scenario:

Contoso’s order processing system has at least two messaging participants. The Web site is the initial sender, and the internal systems are the ultimate receivers. It might be the case that we also have a load-balancing messaging router that routes Web site orders to the proper internal system. As shown in Figure 2-2, we can consider this router an intermediary. 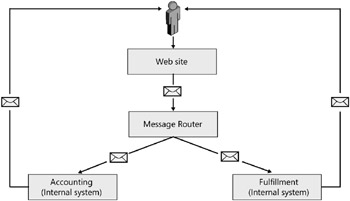 A sender is an entity that initiates communication.

Several people have handled the thank-you letter as it was being delivered to Rusty. To name a few:

Through experience, we have come to understand that we don’t know how many people will handle a letter as we send it through the mail. We do expect certain behaviors, however, from those handling our mail. For example, we expect them to not open the mail or materially alter its contents. We also expect that each mail handler will move the letter closer, either in process or in location, to our intended recipient. These message waypoints are called intermediaries. Given these parameters, I define an intermediary as follows:

It is also possible, however, that the message envelope will be altered at some point during handling. Think of a postmark. Postmarks do not materially change the contents of the message, but they do provide some information that describes when and where the letter was received into the postal system. The postal service may also add a “Return to Sender” mark on the envelope if the delivery address is not valid. At a high level, these are the types of operations that can be performed by an intermediary. An intermediary should not, however, change the contents of the message.

Let’s reexamine Contoso’s order processing system for a more computer-based example of an intermediary. As it turns out, Contoso sells custom boomerangs and standard boomerangs. Orders for standard boomerangs are processed through Contoso’s inventory system, while custom boomerangs must be sent to the manufacturing system. The system architects at Contoso might have decided to put this logic in a routing system, further encapsulating business logic away from the Web site. The effect of this design is that the Web site sends messages to message routing servers. This routing system might not materially change the contents of the message, but it does route the order to either system. At a high level, the routing system is acting as an intermediary between the initial sender (the Web site) and the ultimate receiver (the inventory or manufacturing systems).

A Few Words About Business Logic

This additional layer in the architecture can be very useful in capturing a business process. In the past, applications “hard-coded” business processes in their applications. For example, business requirements or regulations might require the Contoso accounting system to receive payment for boomerangs before orders are fulfilled. The traditional distributed system paradigm spreads the logic of this business process between the Web site, the accounting system, and the fulfillment system. This design has a major drawback: when business requirements or regulations evolve, each part of the system requires modification.

In recent years, companies have spent fortunes trying to develop their own internal mechanism for dealing with this problem. Often these efforts involved defining a proprietary XML grammar for expressing business processes and building a custom runtime engine for interpreting these rules. It is my guess that, more often than not, these efforts ended badly.

As mentioned in Chapter 1, “The Moon Is Blue,” Microsoft Windows Communication Foundation (WCF) ships with a product called Windows Workflow Foundation (WF). Among other things, WF is designed to capture these sorts of business processes. WF does much of the heavy lifting previously required to build this sort of business process engine. In the next few years, expect workflow to be more a part of business application development.

My thank-you letter was intended to go to my friend Rusty. When I sent the letter, I had no idea how many people were going to handle it, but I hoped that each handler would work toward delivering the letter to Rusty. As a result, I define the ultimate receiver as follows:

The ultimate receiver is the intended, addressable target of a message.

A single message can have only one logical ultimate receiver. For example, it is not possible to address a postal letter to more than one address. Physically, however, one address could reference multiple entities. For example, if Rusty’s department is responsible for sending the football tickets, I could address the thank-you message to the entire department. My intention in this case is that everyone in the department will receive the message. It is also possible that my message is posted on a bulletin board, sent around to each individual in the department, or announced in a department meeting. In the end, however, the message is intended for one logical entity, the ultimate receiver.