How to View SDV Reports

After SDV completes a verification, it produces a report of the defects it detected. For each defect, SDV generates a Defect Viewer, which is a set of windows that display a trace of the path to the defect. You can view the list of defects in the Static Driver Verifier Report Page, where you can open Defect Viewer to examine SDV results.

In some cases, a defect trace leads to a defective C statement that can be seen as the root cause of the defect. In more complicated cases, the defect root cause cannot be associated with a single C statement. For example, consider the imaginary rule discussed in "Under the Hood: How the SDV Verification Engine Works" earlier in this chapter:

To Open the SDV Report

SDV displays the violated rules under the Defect(s) node in the Results pane. Figure 24-1 shows a sample SDV report for the verification of the BufAfterReq* rules on the KMDF Fail_driver6 sample driver. 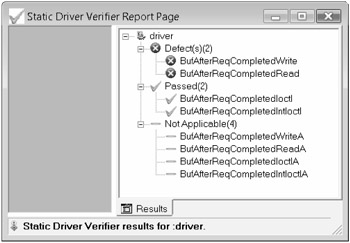 SDV results appear as a multilevel list of nodes. Nodes are shown by icons with text messages. The upper level nodes stand for result categories, the most important of which are Passed, Defect, Timeout, Spaceout, Not Applicable, and Uncertain. The lower level nodes show results per rule. Figure 24-2 shows all possible node icons with their meanings. 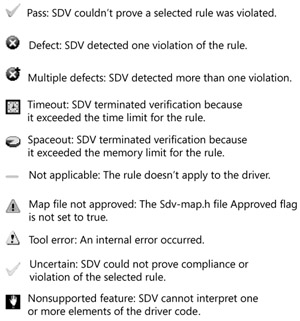 Tip  See "Results Pane" in the WDK for details about the Results pane icons, plus information about how to use the Results pane-online at http://go.microsoft.com/fwlink/?LinkId=80081.

In Figure 24-3, Defect Viewer displays information about a violation of the FDOPowerPolicyOwnerAPI rule in the KMDF Fail_Driver3 sample driver. See "Example: Walkthrough SDV Analysis of Fail_Driver3" later in this chapter for steps to build and verify this driver by using SDV. 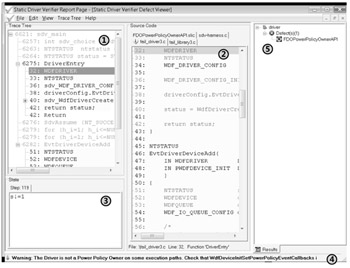 In Figure 24-3, the numbers refer to these elements, which provide information about the results:

Tip  See "Defect Viewer" in the WDK for details about how to use Defect Viewer to filter and manage SDV results-online at http://go.microsoft.com/fwlink/?LinkId=80066.

SDV known issues  If SDV reports an error that you think is inaccurate, review the SDV limitations and look for known issues that might prevent SDV from correctly interpreting the driver code. Specifically, SDV:

Tip  See "Static Driver Verifier Limitations" in the WDK for details-online at http://go.microsoft.com/fwlink/?LinkId=80086.