How to Use WinDbg to View the KMDF Log

KMDF includes an internal trace logger that generates a log for each KMDF driver. The log contains a recent history of events, such as those generated by the progress of IRPs through the framework and the corresponding requests through the driver. You can use WDF debugger extensions to view and save the KMDF log during interactive debugging. You can also make the KMDF log as part of a small memory dump, so that you can inspect the contents of the log after a crash.

To View the KMDF Log During a Debugging Session: 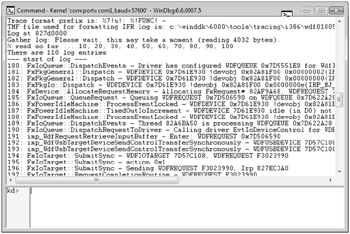 You can also save the contents of the KMDF log as a trace log file by running the !wdflogsave command as follows:

KMDF can determine whether a particular driver caused the bug check codes in the following list:

You can control several aspects of the KMDF log:

As discussed in "How to Prepare the Test Computer for KMDF Debugging" earlier in this chapter, you can specify the number of memory pages that the framework assigns to the log by setting the LogPages value of the driver's Parameters\Wdf registry subkey. You can specify values ranging from 1 to 10 pages. Remember that the size of a crash dump file is limited. If the log is large, the operating system might not write the contents of the log to such a file.

You can change the amount of information written to the KMDF log file by setting the VerboseOn value in the driver's Parameters\Wdf registry subkey. A nonzero value for VerboseOn causes the framework to record detailed, developer-level information in the log. You should set VerboseOn only while developing and debugging your driver because doing so can degrade performance.

Each line in the KMDF log is preceded by a string that is called the trace message prefix. The trace logger prepends this prefix to each message that is written to the log. By default, the prefix includes a standard set of data elements, but you can change the default elements to suit your particular requirements.

You can change the prefix string for a KMDF driver by setting the TRACE_FORMAT_PREFIX environment variable or by using the !wdfsettraceprefix debugger extension command. Setting TRACE_FORMAT_PREFIX allows you to control the format of the standard information captured by ETW, such as line, function name, module name, and so on. The contents of the prefix are specified by a format string that is similar to the one in printf statements.

See "Trace Message Prefix" in the WDK for details on how to construct a format string-online at http://go.microsoft.com/fwlink/?LinkId=80623.

To set the environment variable, use a command like the following:

This command sets the trace message prefix to the following:

To set the string during debugging, Use the !wdfsettraceprefix command, as follows:

The following example sets the same string as the preceding environment variable: