This walkthrough can be done on the same computer on which the driver was developed, but this walkthrough assumes a dedicated test computer. This example was created on a computer running a checked build of Fx2_Driver on a free build of Windows Vista, but it will work much the same way on Windows XP.

These steps apply to the information presented in "How to Prepare for UMDF Debugging" earlier in this chapter.

To Prepare for the Debugging Session

Start the Debug Session for Fx2_Driver

This walkthrough starts with the driver load and startup code.

To Start the Debugging Session 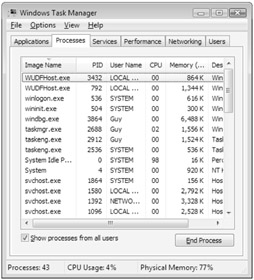 A convenient place to start debugging the startup code is the driver's CMyDriver:: OnDeviceAdd method.

To Load the Symbols and Source Code

The device object is one of the key UMDF objects. WinDbg can provide information about the object and its current state.

To Display Information About the Device Object and its Current State

This displays the contents of the device object, including the interfaces that it exposes and the values of its data members, as shown in Figure 22-3. Note that some of the data members have not yet had values assigned to them. Much of that takes place later, in the CMyDevice:: OnPrepareHardware routine. 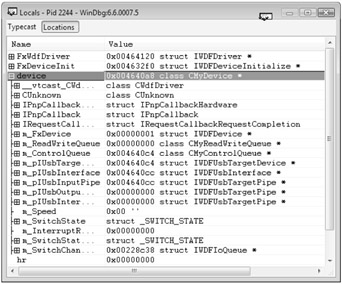 Use UMDF Debugger Extensions to Examine the Device Callback Object

The WinDbg UI can provide only a limited amount of information about the device object. The UMDF debugger extensions are often the most useful tools because they can provide detailed information on UMDF-specific issues.

To Use UMDF Debugger Extensions to Examine the Device Object

The !dumpdevstacks UMDF debugger extension displays information about the device stack in the current host process. Figure 22-4 shows an example of the the !dumpdevstacks command for Fx2_Driver.

Use UMDF Debugger Extensions to Examine an I/O Request

You can use WinDbg to see exactly how an I/O request is handled.

To See How the Driver Handles I/O

The first part of Figure 22-5 shows the output of the !wdfrequest command with Fx2_Driver. 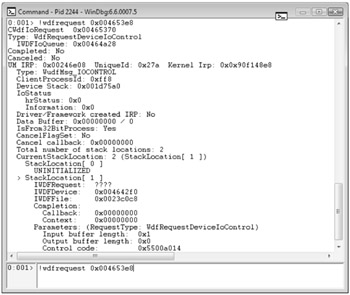 See "More Suggestions for Experimenting with WinDbg" at the end of this chapter for more ideas on how to use WinDbg to debug WDF drivers.