This section shows how to use WinDbg with the KMDF Osrusbfx2 sample, starting with the EvtDriverDeviceAdd callback routine which is a key part of the driver load and startup code. As with the UMDF example, the Osrusbfx2 sample has no known bugs, but using WinDbg to walk through the source code is a convenient way to demonstrate the basics of how to use WinDbg with KMDF drivers.

Prepare for a Debug Session for Osrusbfx2

These steps apply to the information presented in "How to Prepare for KMDF Debugging" earlier in this chapter.

To Prepare the Systems for Debugging

Start the Debug Session for Osrusbfx2

After you have prepared the system, you can start the session by using the procedures defined in "How to Start a KMDF Debugging Session" earlier in this chapter.

To Start the Debugging Session

The test computer starts loading the Osrusbfx2 driver and then breaks into the debugger when the framework calls OsrFxEvtDeviceAdd. The routine's opening bracket will be highlighted in the Device.c source window.

Now you can start examining the driver code. Here are a few examples:

The Locals window does provide one very useful piece of information about the device object: the object handle. It's the hexadecimal value in the variable's Value column. This value is not interesting by itself. However, you can use it with the KMDF debugger extensions to get much more information about the object than is available through the debugger's UI.

Use KMDF Debugger Extensions to Examine the Device Object

You can use the KMDF extensions described in "Debugger Extensions" earlier in this chapter to examine the device object.

To Use KMDF Debugger Extensions to Examine the Device Object

The Flags argument controls what information appears. Figure 22-6 shows the results of running !wdfdevice against the Fx2 device object with a flag argument of 0x1F. This flag value sets all the available flag bits and produces the most verbose output. 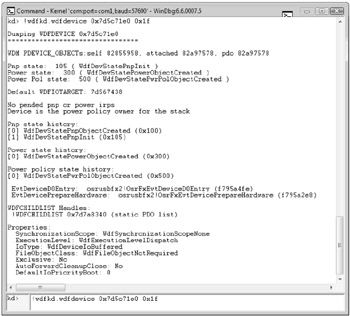 Tip  See the !wdfdevice reference page in the Debugging Tools for Windows help file for more information on flag values.

Use KMDF Debugger Extensions to Examine an I/O Request

The steps in this section provide an example of how to use the KMDF debugger extensions to examine how the Osrusbfx2 sample driver handles an I/O request.

To See How the Driver Handles I/O

The top part of Figure 22-7 shows the output of the !wdfrequest command for Osrusbfx2. 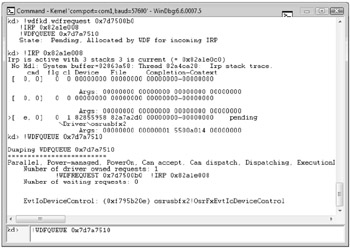 The amount of information that !wdfrequest displays about the object is limited, but the output also includes two strings that contain complete command lines for !IRP and !WDFQUEUE:

Many KMDF debugger extensions display strings with suggested commands that simplify the process of displaying related information. For example, without the !IRP string, you would first be required to spend time determining the address of the IRP before you could run the !IRP command. The simplest way to run the commands is to use the cursor to copy the string from the upper pane to the lower pane and then run the command.

The lower part of the upper pane shown in Figure 22-7 displays the output from the two suggested command lines.