WinDbg is used in distinctly different ways for UMDF drivers and KMDF drivers. However, several basic WinDbg features and practices apply to both UMDF and KMDF drivers, as described in this section.

The Build utility supports two types of build: checked and free. WinDbg can be used with either build type, but checked builds are usually preferred for debugging because:

Performance is the main shortcoming of checked builds, so they are typically used during the earlier stages of the development cycle when eliminating bugs is the primary concern. Tasks such as performance tuning and final testing must be performed on a free build of Windows and typically are not done until the end of the development cycle, after most driver bugs have been eliminated. WinDbg is still used to debug any issues that arise during this phase of testing, but free builds are more difficult to work with and bugs are typically harder to locate and fix during the late phases of testing.

Info  See "Using Checked Builds of Windows" on the WHDC Web site for information about obtaining and using checked builds-online at http://go.microsoft.com/fwlink/?LinkId=79304.

WinDbg has a menu and associated toolbar for performing tasks such as setting up and starting a debugging session, stepping through source code, setting breakpoints, and so on. One key part of the UI is a collection of windows, which can be displayed by clicking the View menu. The most important one is the Command window, which is displayed by default. It shows information about the ongoing debugging session and allows you to run debugger commands and extensions. Figure 22-1 shows the WinDbg UI from a debugging session with the Fx2_Driver sample. 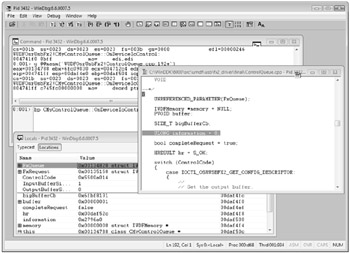 The Command window is open by default and is where you do most of the debugging work. The upper pane displays data such as the register values and assembly code that is generated as you step through the driver code. The lower pane supports a command-line interface that can be used to run debugger commands and extensions. You can use the cursor to highlight and copy text from either pane and paste it into a WinDbg command line. For example, the data that some WDF debugger extension commands display includes suggested command-line strings that retrieve related information. To obtain the information, just paste the string into the lower pane and run it.

The other windows display detailed information and must be explicitly opened by using the View menu. Figure 22-1 shows two of them: a Locals window that displays the values of local variables for the currently executing routine and a source code window that can be used to view and step through the driver's source code. Other WinDbg windows include the following:

Some debugging tasks can be done through the GUI. However, it is limited to relatively simple procedures like stepping through source code or issuing a Break instruction. A much more powerful set of tools is available through the Command window's lower pane, which can be used to run debugger commands and extensions.

WinDbg comes with a set of standard debugger commands. Some duplicate the functionality of the GUI, but many perform tasks or provide detailed information about various aspects of the driver that cannot be done any other way. Some examples of debugger commands are shown in Table 22-1.

Tip  See "Debugger Commands" in the Debugging Tools for Windows help file for a complete list of WinDbg commands.

Symbol files are essential for effective debugging. They contain information about an executable file, including the names and addresses of functions and variables. The symbols for UMDF and KMDF drivers are in a product data base (.pdb) file. This file is produced by the Build utility when the project is compiled and placed in the project's output folder.

If you are having difficulty getting WinDbg to work correctly-for example, seeing an incorrect stack or incorrect local variable values-a likely cause is missing or incorrect symbol files. To work properly, WinDbg must have the correct symbol files. In particular, the symbols must be from the same build that produced the driver. For example, WinDbg cannot use the symbols from a free build to debug a checked build of a driver. The symbol files are different, even if they were produced from exactly the same source files.

You must explicitly specify the location of your driver's symbol files by adding the folder to the WinDbg symbol search path list.

To Specify a Driver's Symbol Path

You can download Windows symbols from Microsoft and set the path, as described earlier in this chapter. However, getting the correct set of symbol files can sometimes be difficult. The preferred way to get Windows symbols is to direct WinDbg to the Microsoft public symbols server. WinDbg then automatically downloads the correct symbols for the build of Windows on which your driver is running.

To Instruct WinDbg to Download Symbols from the Microsoft Symbols Server

This debugger command appends the symbols server location to the symbol file path and downloads the appropriate PDB files.

To Install the Windows Symbols Manually

To perform source-level debugging, you must also provide WinDbg with the location of the driver's source files.

Debugger extensions work much like debugger commands, but provide additional functionality, as follows:

Tip  See "Debugger Extension API" in the Debugging Tools for Windows help file for information on how to write a debugger extension.

Debugger extensions are provided as DLLs, and WinDbg loads the standard extensions automatically. Others, including the WDF extensions, must be explicitly loaded. Debugger extension commands all start with a "!" character. They are invoked in the same way as debugger commands, by typing them in the Command window's lower pane, along with any necessary arguments.